Several things stuck out to me throughout our drive into Colorado. The rivers made for a beautiful new addition to the scenery, as they seemed to reflect the blue sky perfectly in their crystal clear waters. The snow began to increase in abundance, and we climbed to some of the highest altitudes. We passed through two particularly lovely Ski Towns (Vail and Breckenridge), and you could see the skiers as small as ants, sailing down the mountain as we drove past. 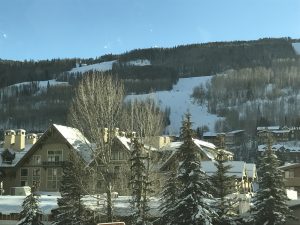 Speaking of altitude, let’s take a moment to nerd out about the Eisenhower Tunnel. We passed through this while on Interstate 70 about an hour outside of Denver, at the point of highest elevation on our entire journey. At a maximum altitude of 11,158 ft (3,401 m) AMSL, this is both the longest mountain tunnel and highest point on the Interstate Highway System. I didn’t know about it prior to arriving at the entrance, and I was amazed at the size and location of this tunnel. It literally feels like they climbed to the top of a mountain and bore a tunnel diagonally down through it. An incredible feat of engineering! 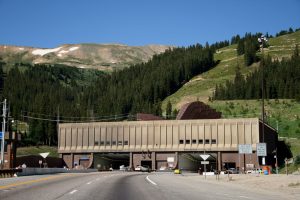 Unfortunately, traffic started getting especially messy as we entered Denver. We found the city structure and road system to be particularly confusing as well, which resulted in a few detours and re-routes as we made our way to the Doubletree. Luckily we did not have much planned for the evening, so as we settled into our hotel room around 8 PM, we were happy to call it a day.

We were greeted in the morning with a lovely downtown and mountain view of the city. 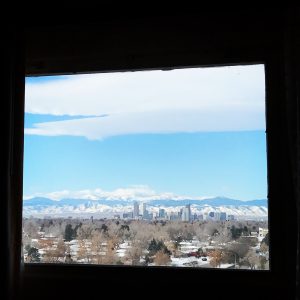 Ready for some breakfast, we scouted out a nearby “Southern Kitchen” called Four Friends, and enjoyed a delightful brunch there. Megan had a massive BLT with fried green tomatoes, pimento cheese and a fried egg, all on homemade potato bread. I enjoyed a more traditional sausage and egg breakfast, but they provided me with some lovely gluten-free bread, which made it a special treat. 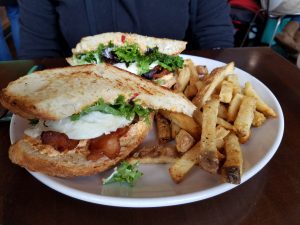 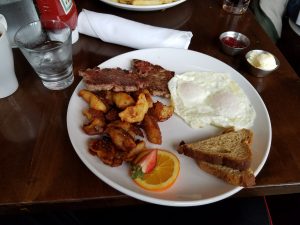 We returned to our hotel to find a sight any long distance traveler can appreciate! 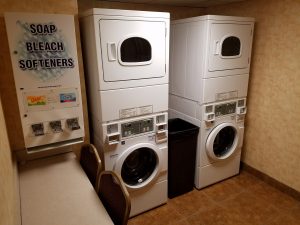 After washing, drying and folding some laundry, it was time to explore Denver in earnest. Our first stop was obviously the city’s Aquarium. Purchased by Landry’s in 2003 after an intense bidding war with Ripley’s, Denver’s “Downtown Aquarium” felt a bit commercialized but still held a tremendous amount of lovely sea life. Some particular standouts were a pensive Tiger and an unusually social Octopus. While Megan did her best to photographically catalogue every creature in the building, she did need my help for one special group photo: 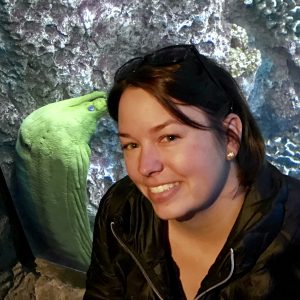 Next, it was time to check out downtown Denver’s shopping scene, and we found a charming area for this at Larimer Square. We walked the street a few times, stopping to browse at the fancy shoppes. 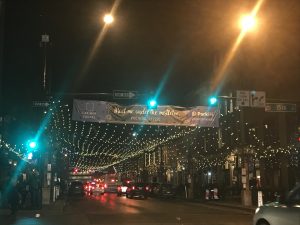 Eventually our hunger got the best of us, and we settled into Tom’s Urban, a trendy little comfort food diner where I enjoyed a bun-less burger in green chili with salsa and a fried egg on top, and Megan ordered a trio of Tacos (Lobster, Bahn Mi, and Steak). The burger was very tasty, though sadly I think Megan suffered quite a bit through her three (very) spicy tacos. 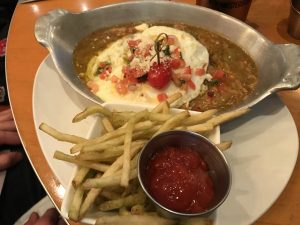 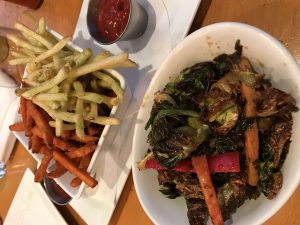 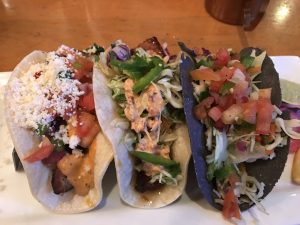 We wrapped our relaxing extended stay in Denver with an IMAX showing of Rogue One near the University of Denver. Worn out from our day of exploration, we returned to our hotel to rest up for our impending long journey to Chicago. 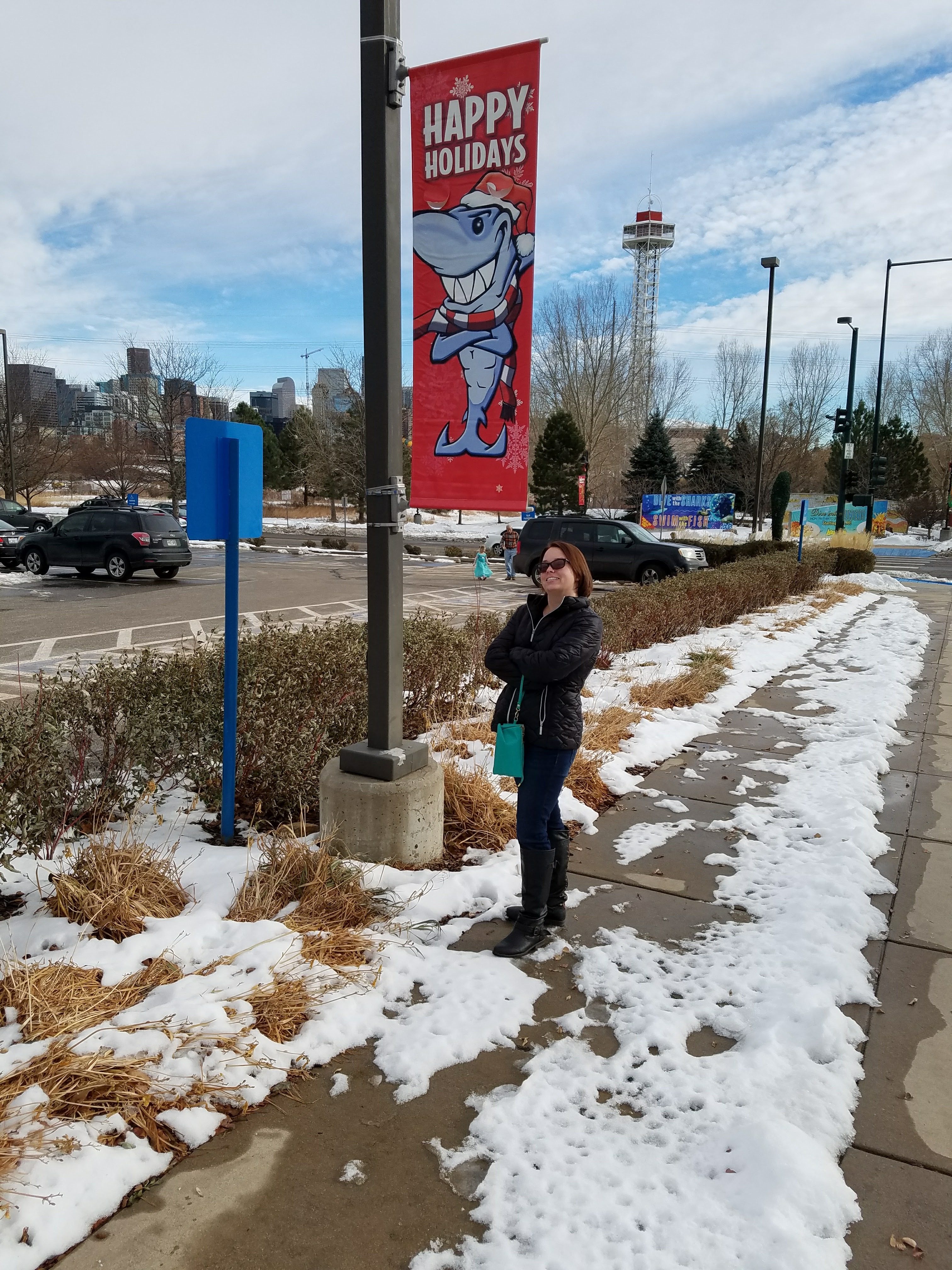 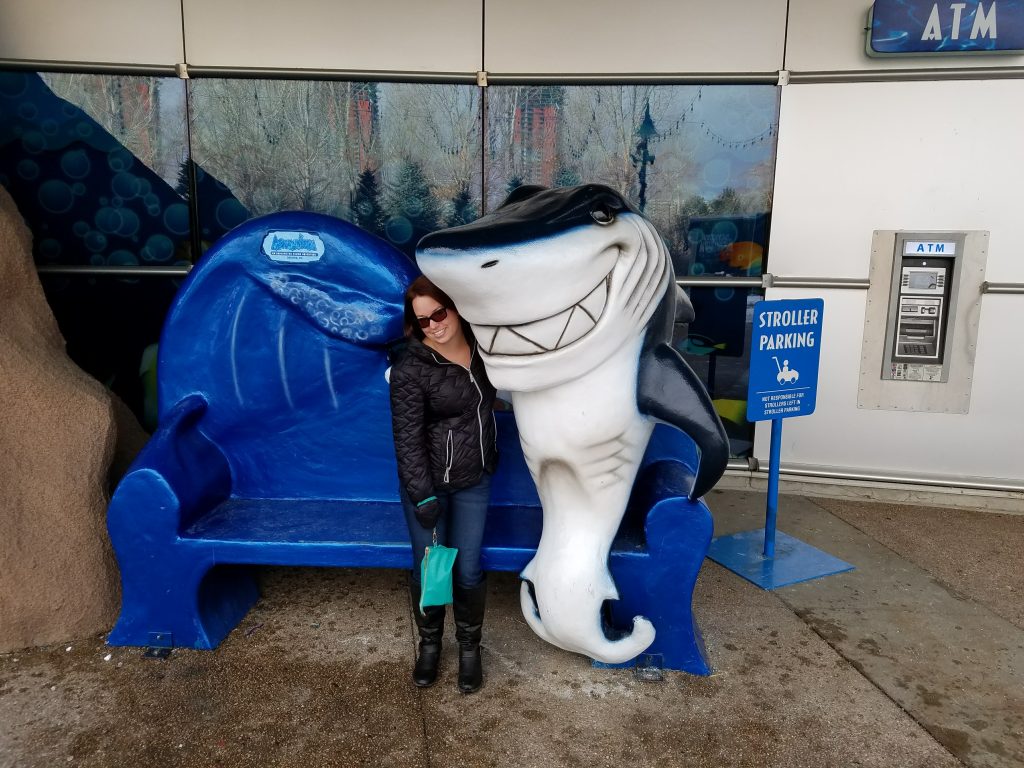 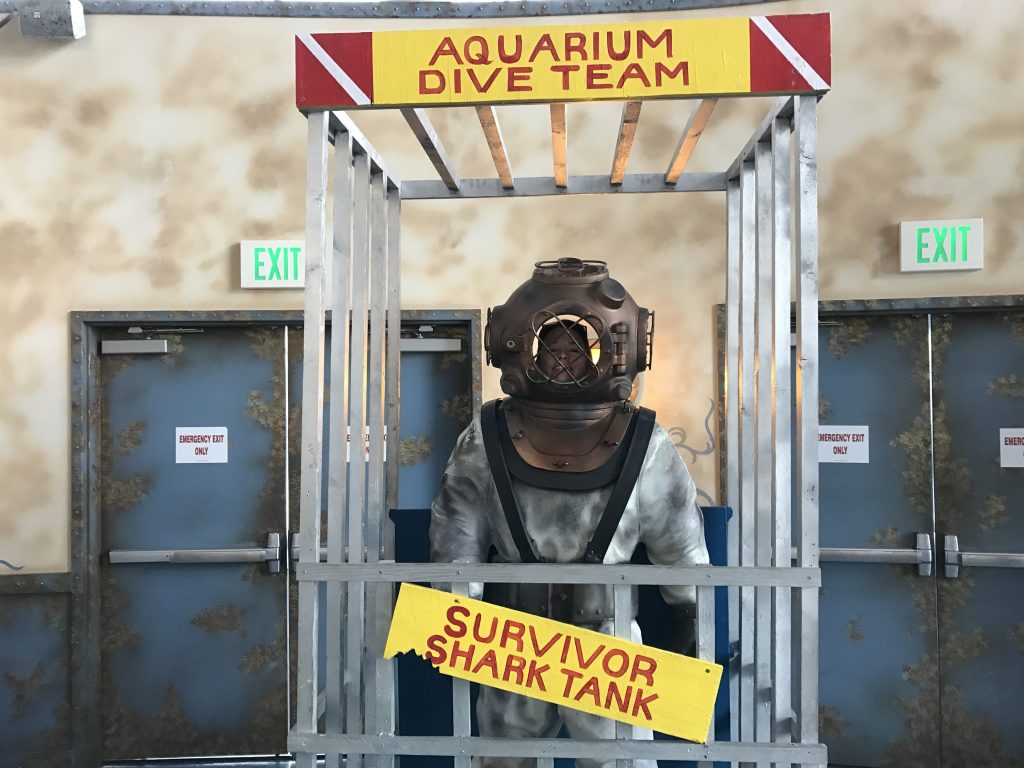 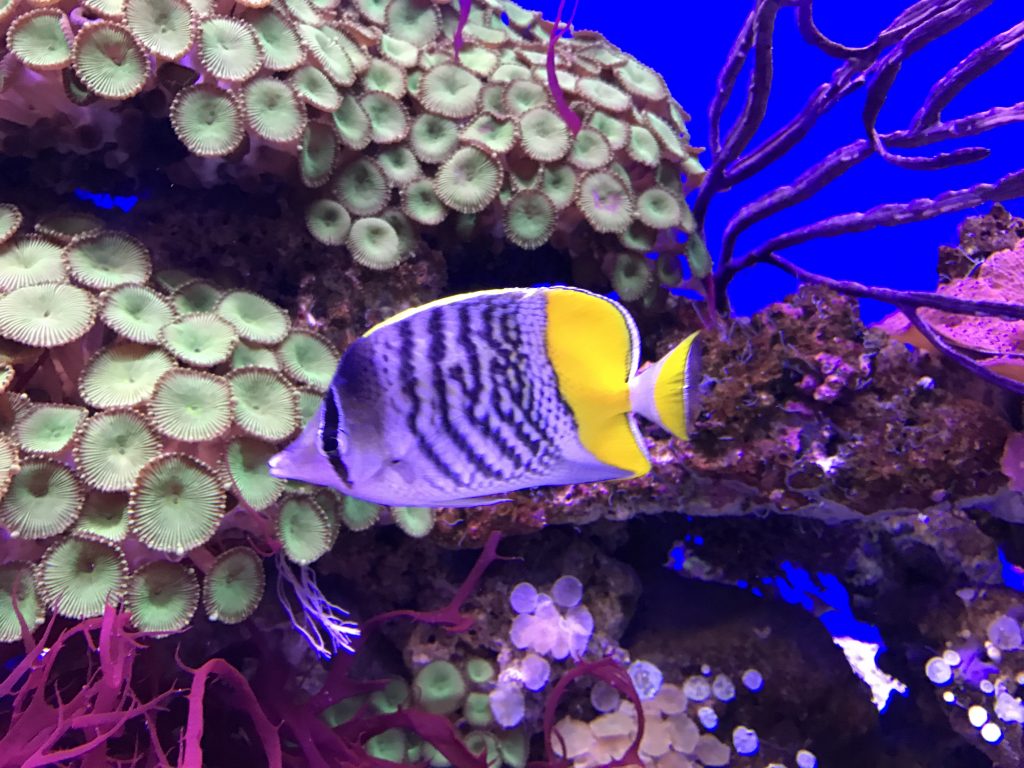 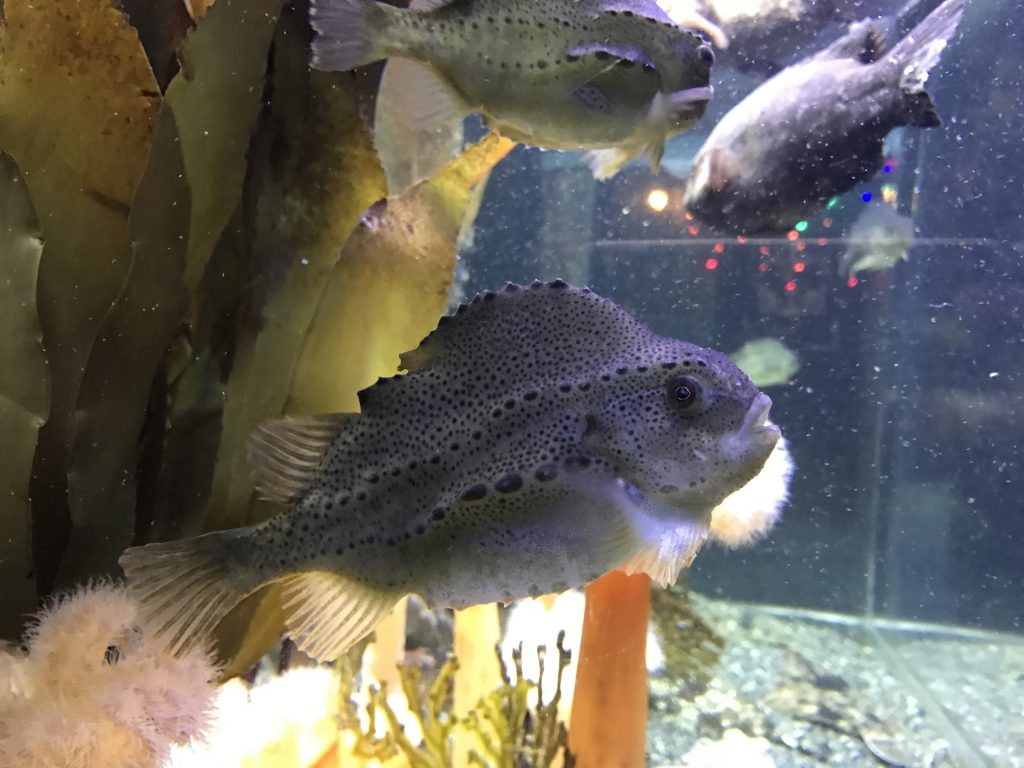 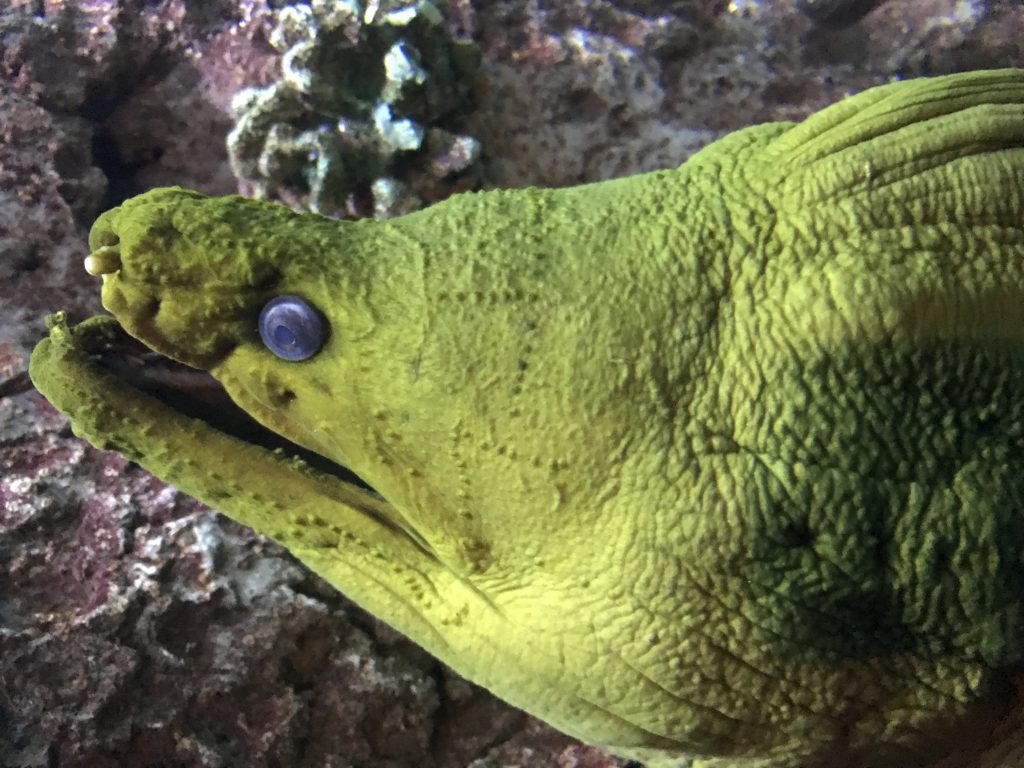 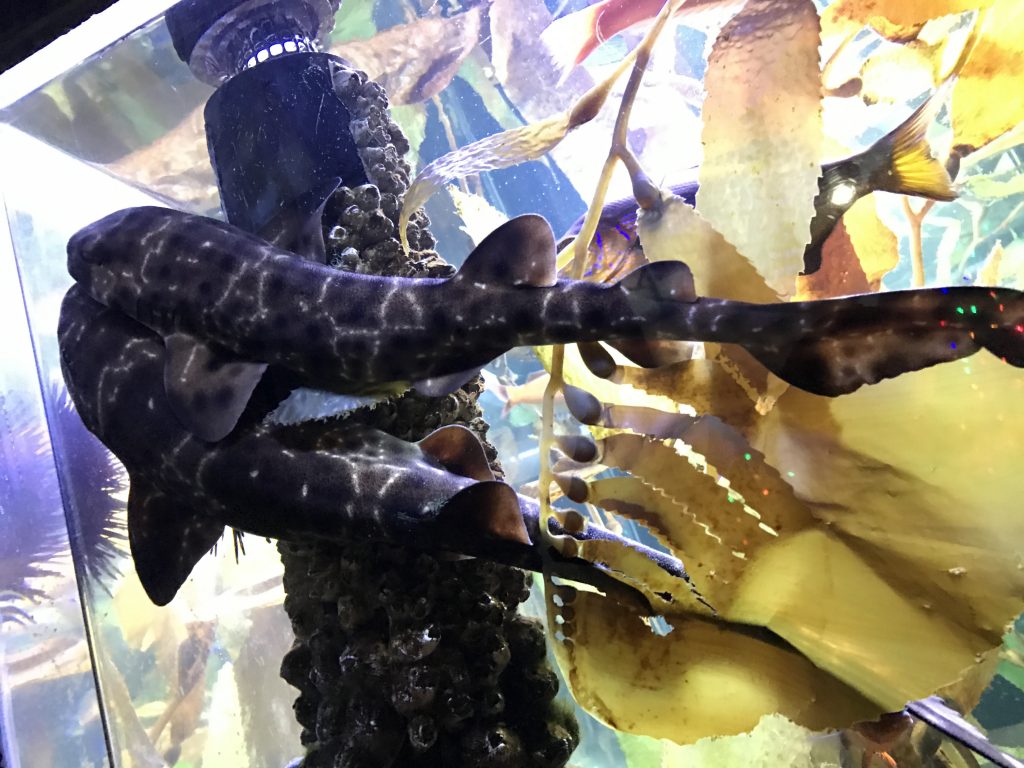 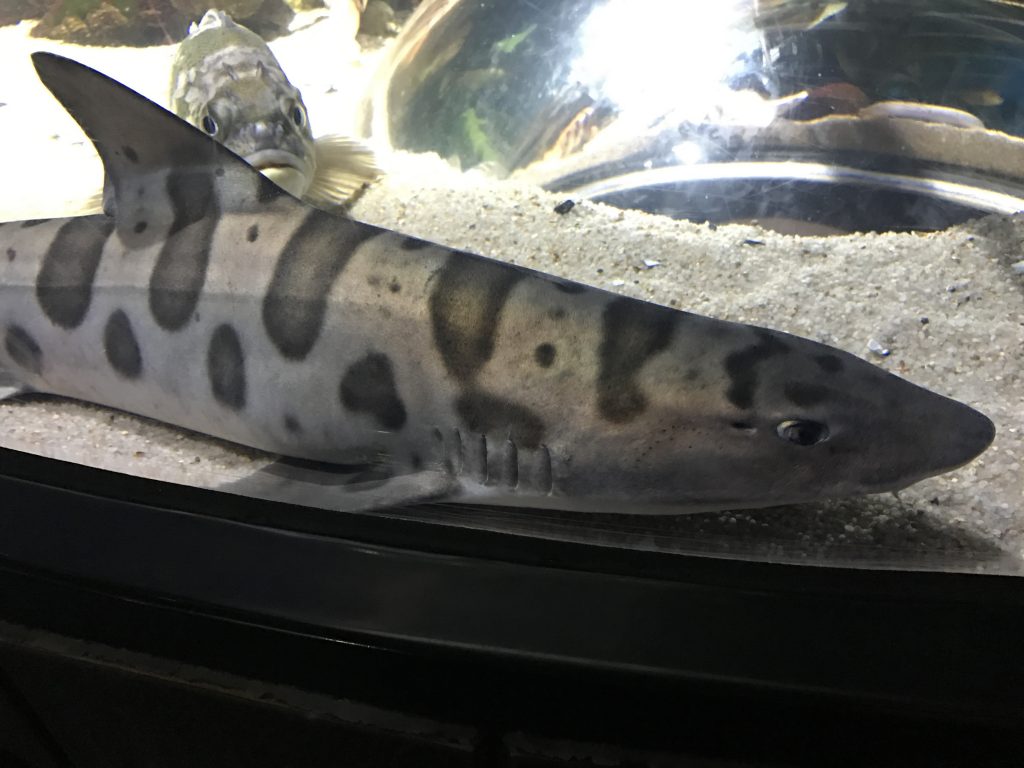 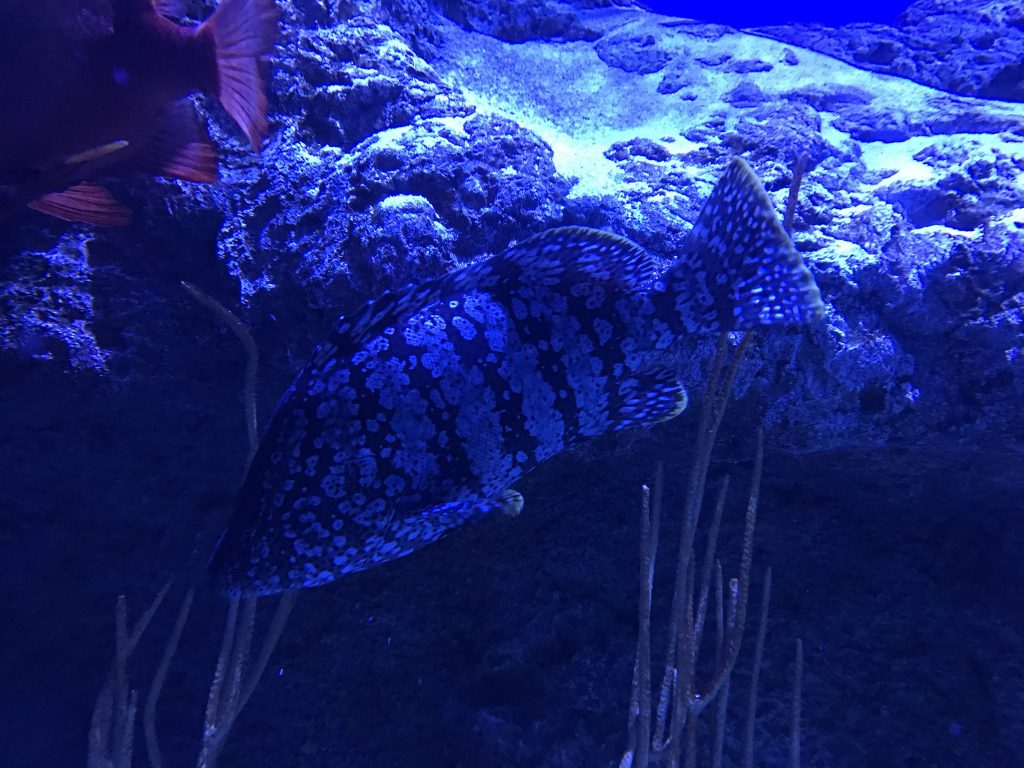 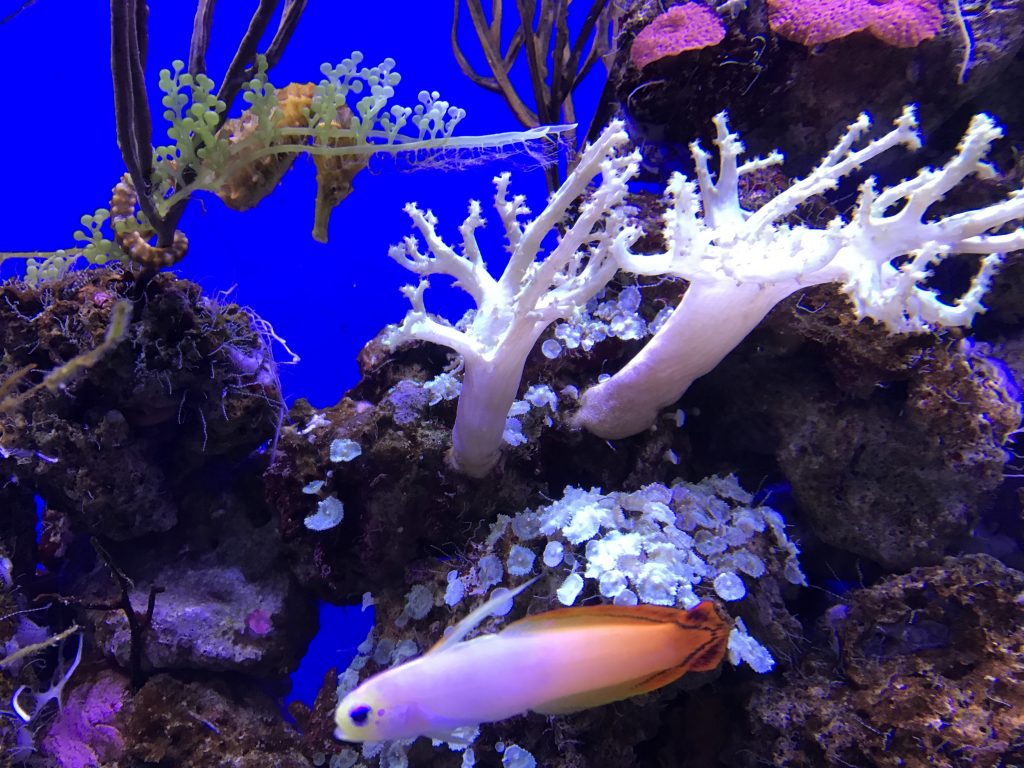 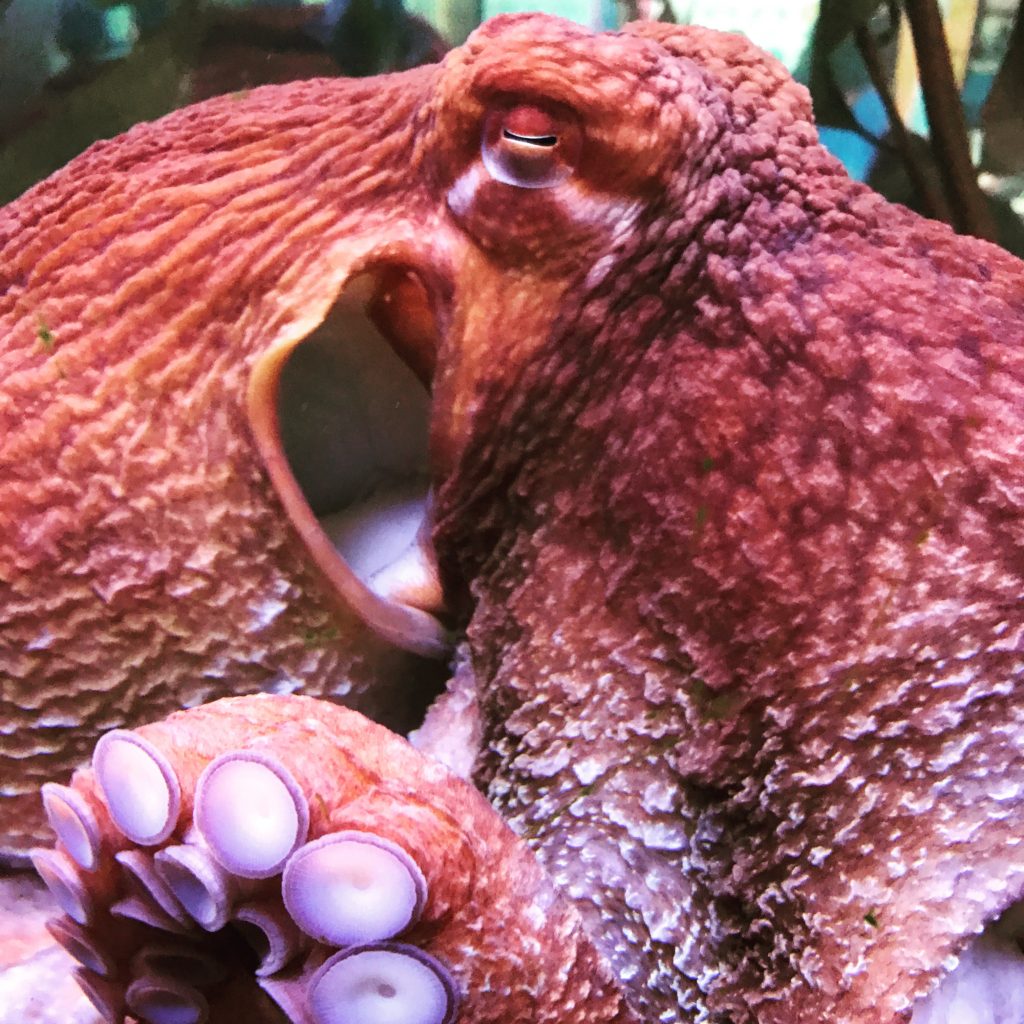 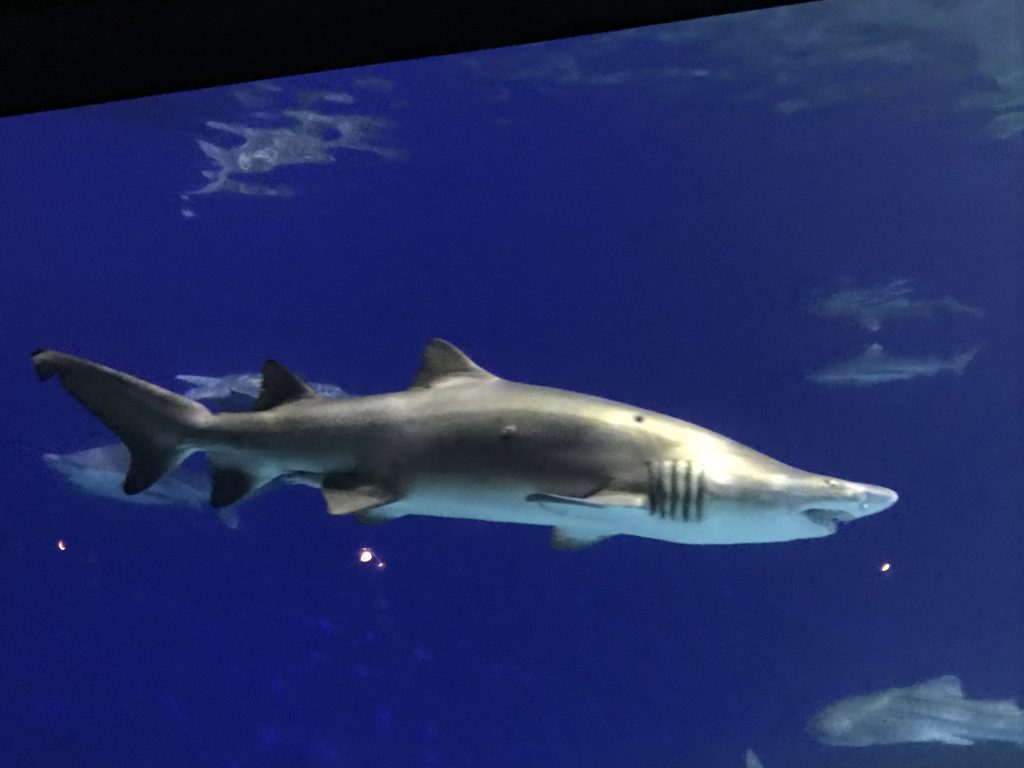 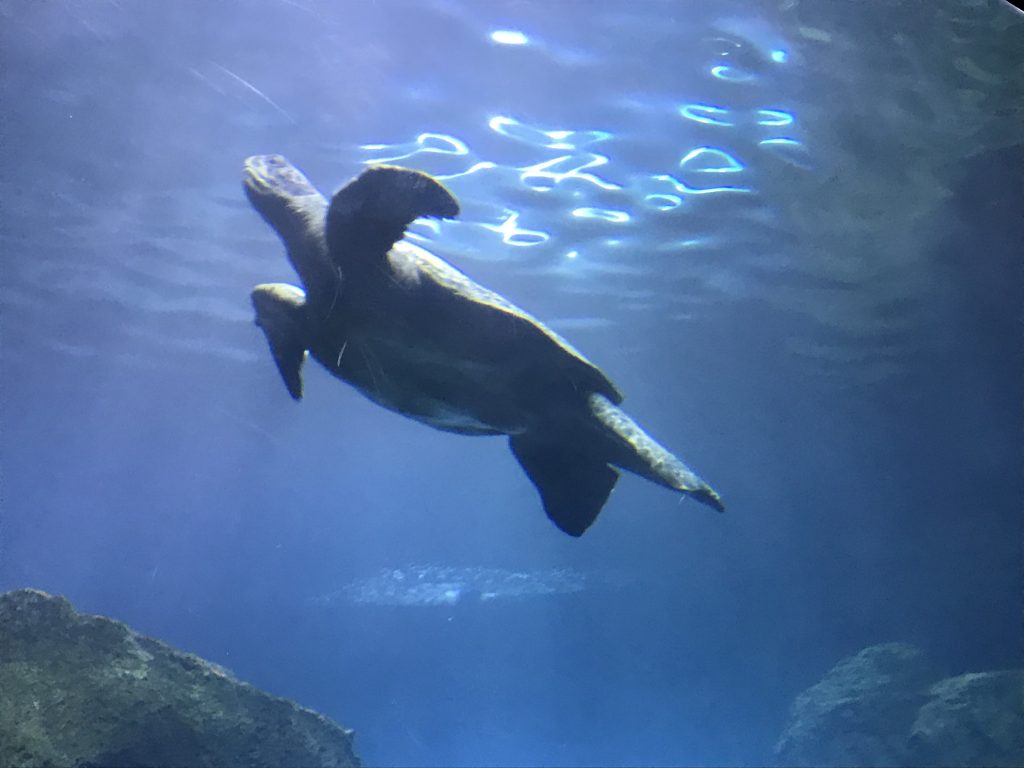 Have you ever found an oasis amidst a long, tiring journey? An interesting stop to linger on along the way?