With the long Easter weekend ahead of us, and a tank full of gas – we decided to head to the NC Coast to see my parents and some old friends. I’d been itching for a chance to take the 4Runner out on the sand and get away from the crowds for some more secluded beach time – so that was our first stop on Good Friday. The original idea was to check out Freeman Park at Carolina Beach and potentially even do some beach camping – but with the beach under renovation and all remaining spots booked, we decided the Fort Fisher State Recreation Area was a better option. At $15 for an access pass on Friday, it was certainly a steal. On top of that, Megan was quite familiar with the area as she had worked for many years nearby at the Aquarium at Fort Fisher, so she knew all the routes in and out. 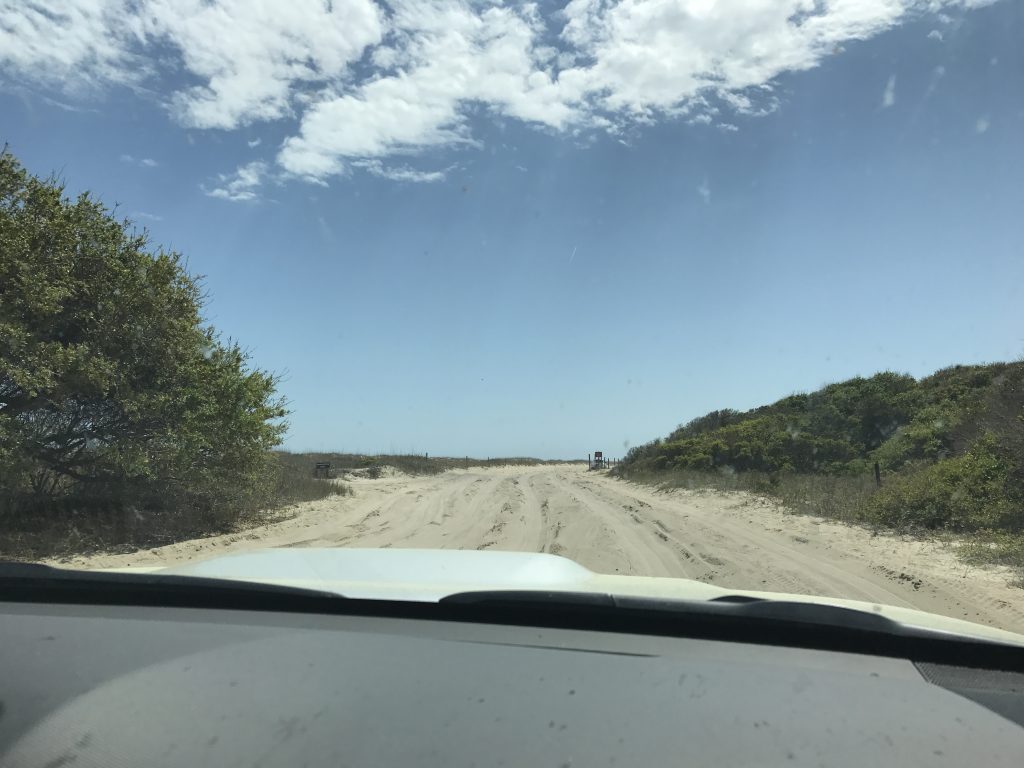 After grabbing a quick Mexican lunch in Wilmington on our way in, we made it the beach and out on the sand in no time. The situation wasn’t quite as secluded as I had originally envisioned, but looking towards the North on the beach, we could see how incredibly packed it was in the general public access areas. The 4Runner handled the sand with ease, and we had a very pleasant afternoon soaking up the sun on the natural, open beach. 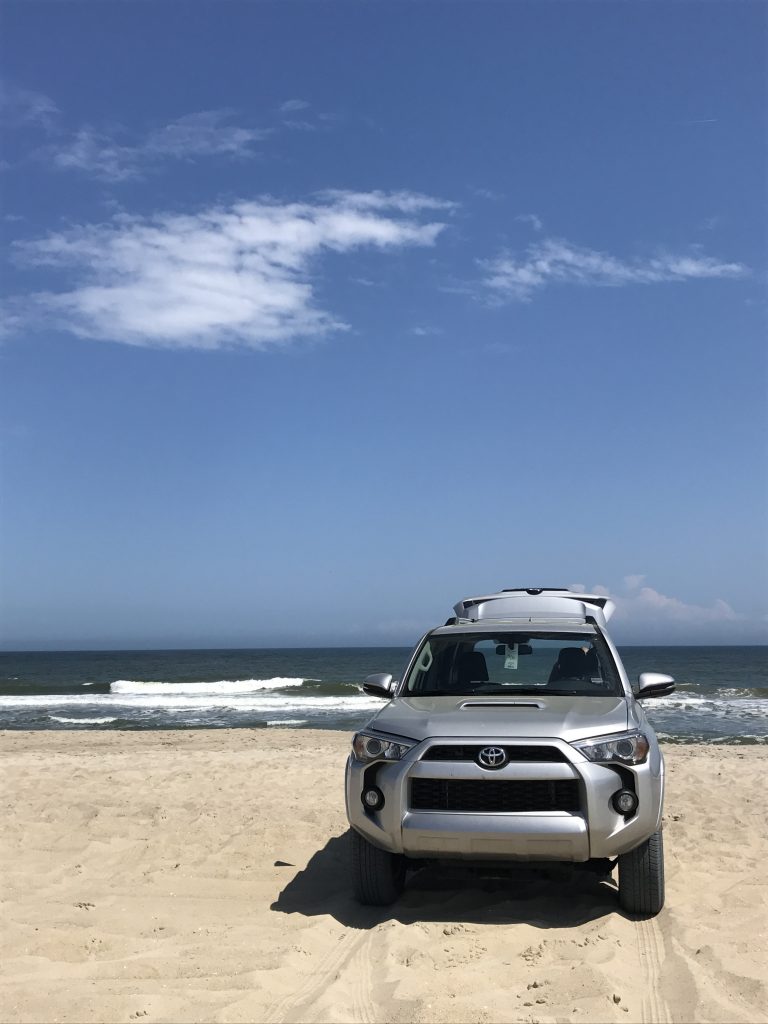 Next up was the Fort Fisher Ferry, to cut across the Cape Fear River and take us straight into South Port. Predictably, the 4:00 PM was full when we arrived at quarter till, but we had enough time to get in a good spot in line for the 4:45 PM ferry. And it’s a good thing we did, because we just happened to be spotted by one of Megan’s old boss from the Aquarium, Jennifer. Apparently she saw me from a distance while we waited for the next ferry, and although we had never met – she recognized me from some of Megan’s Facebook photos. I guess a 6’5 bald, bearded man is somewhat noticeable! 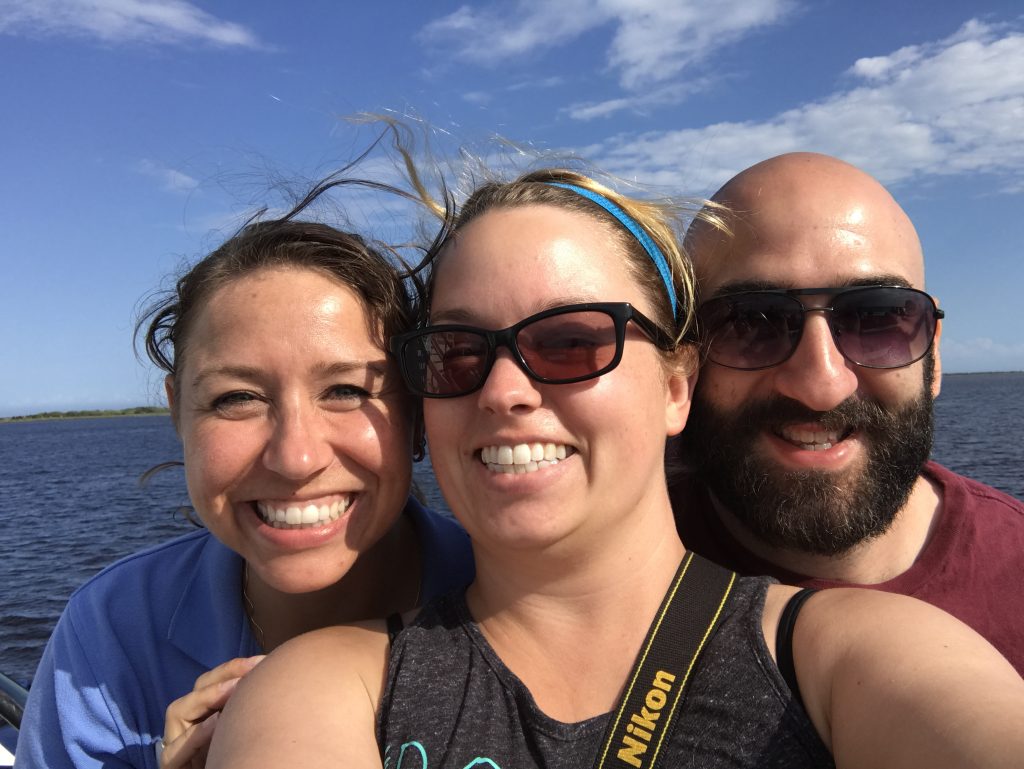 So it was fortunate that we were able to spend the remainder of the wait and the whole Ferry ride catching up with one of her old friends. It was a definitely an unexpected bonus. Megan also got a couple of great shots of the wildlife during our pleasant ferry ride. 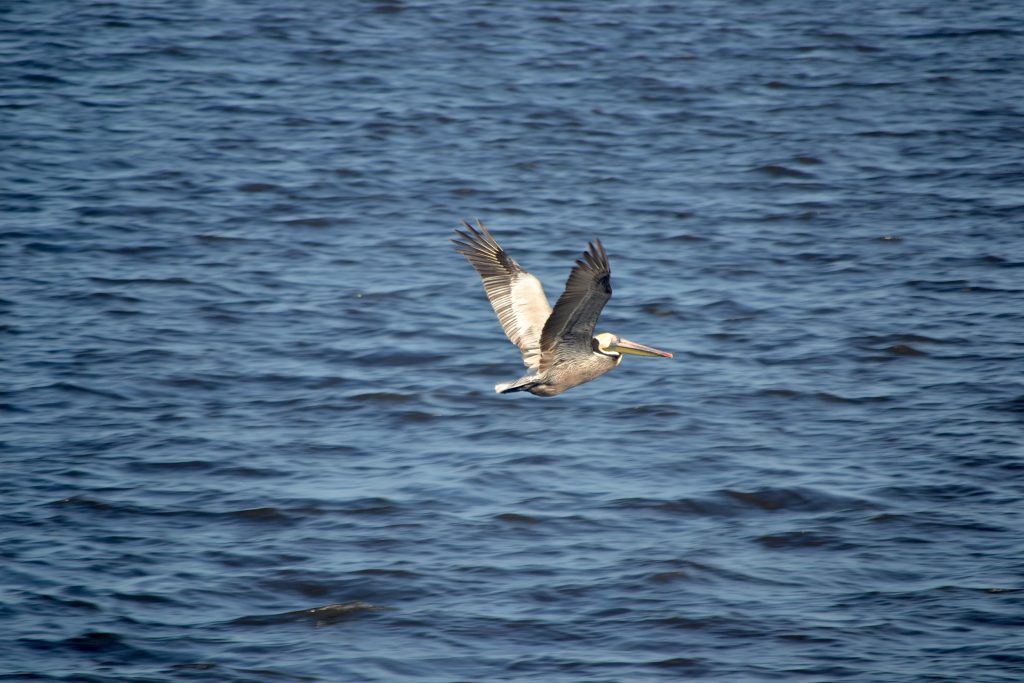 We had promised my parents that we’d cook them dinner in their new house Friday evening, so we made a quick stop over at the Lowes Food in Southport, where we picked up 4 amazing looking New York strips and some sweet potatoes. We arrived at my parents house just as the sun was setting, and my dad and I grilled the steaks up while my mom gave Megan the grand tour of the new house. Dinner turned out amazing, and with a big day ahead of us on Saturday we decided to retire for the evening.

Megan had a big conference in San Antonio coming up, so we decided to head South to the Tanger Outlets in North Myrtle to get her a new outfit for her presentations. The venture was a resounding success, and much clothing was purchased for reasonable prices. The ride back up to Holden was quite pleasant that afternoon, and we decided to stop by the beach at low tide to go shelling. 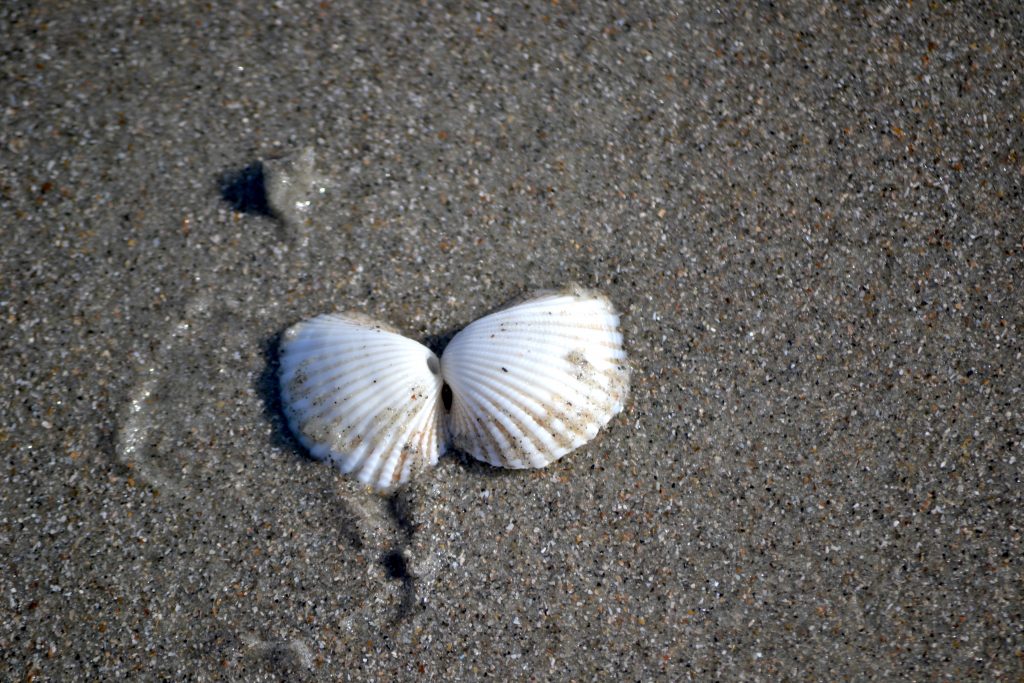 My mom had purchased some freshly caught Salmon from a local market while we were away for the day. My parents and I debated on the best way to cook it, as we had never grilled Salmon before. Luckily, Megan’s dad is a fish expert so we were able to call him and get some helpful grilling advice. While we were all outside grilling the salmon, we spotted an incredible, huge Pileated woodpecker perched atop a tall tree behind next to the house. Megan quickly grabbed her DSLR and was able to get some fantastic shots of the bird mid-flight as it departed! 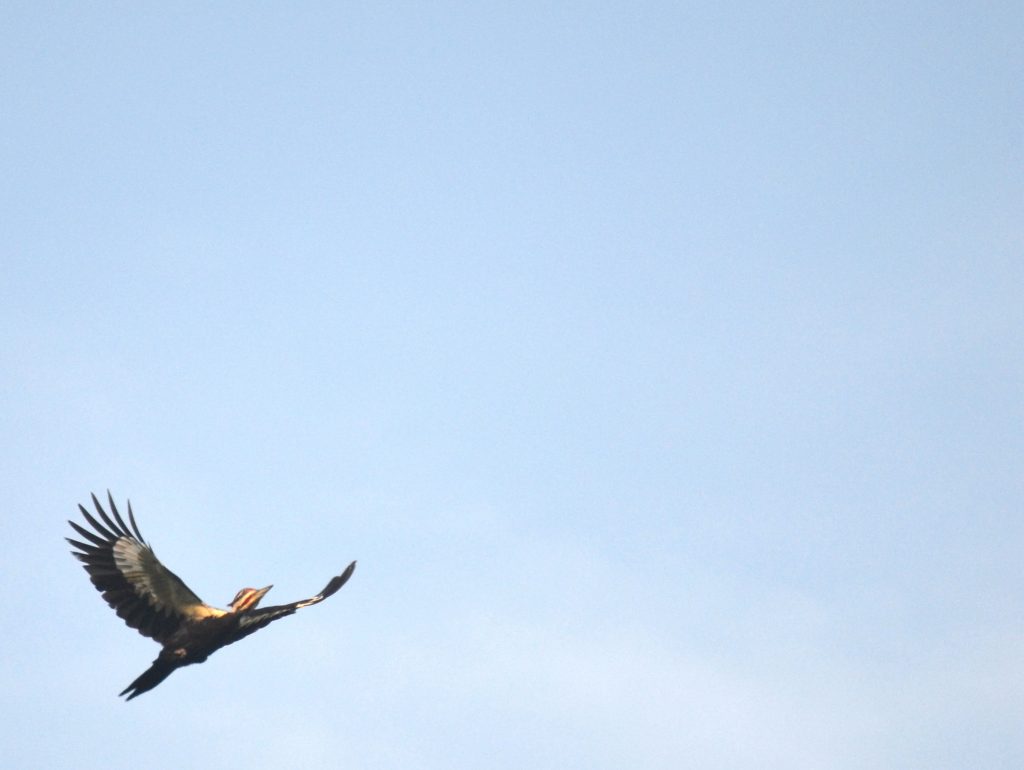 The Salmon turned out fantastic, potentially the best I had ever had. Later that evening, while we were all talking and enjoying a glass of wine, my dad ran into the house and asked Megan to come out to the garage. Just by chance, earlier in our visit, we had been talking about the sticky traps in my parent’s garage, in their attempt to evict a family of rodents that had taken up residence. Megan had mentioned that snakes can frequently get trapped on these, and some vegetable oil is required to free them from their sticky prison. Sure enough, that evening – that is exactly what had happened. 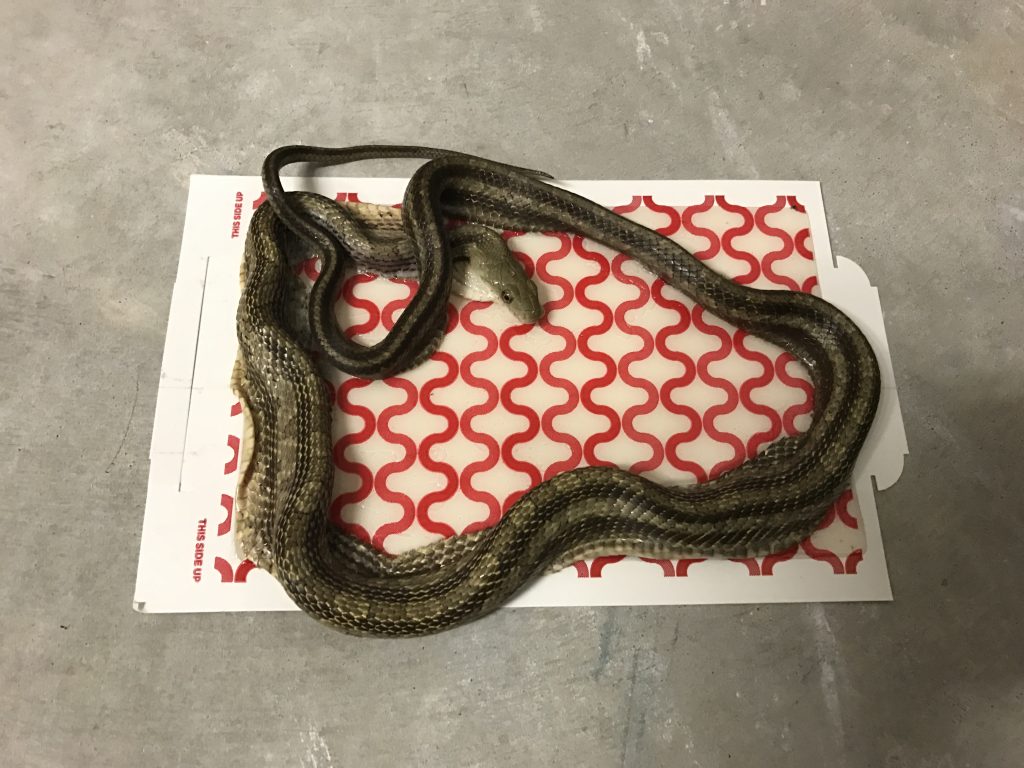 I quickly grabbed some olive oil for Megan and she got to work liberating our scaly new friend. He was obviously very frightened and confused. She had to operate very slowly to prevent losing too many of his scales to the trap, but with some patience and care, he eventually went free!

On Sunday morning, my parents invited us out to an Easter Sunrise service on the pier at Holden Beach. It was short and sweet, with a surprisingly large turnout on the beach that morning. A few hours later, we said our Goodbyes to my parents, thanked them for their hospitality and headed onto Wilmington, where we were to get a later brunch with Kat, Dan and their son Owen. We had a lovely brunch at the Shell Island Resort, with an ocean view. After returning to their house for a drink and to enjoy the easter afternoon sunshine with good friends, we sadly said our Good-byes and headed back to Raleigh. 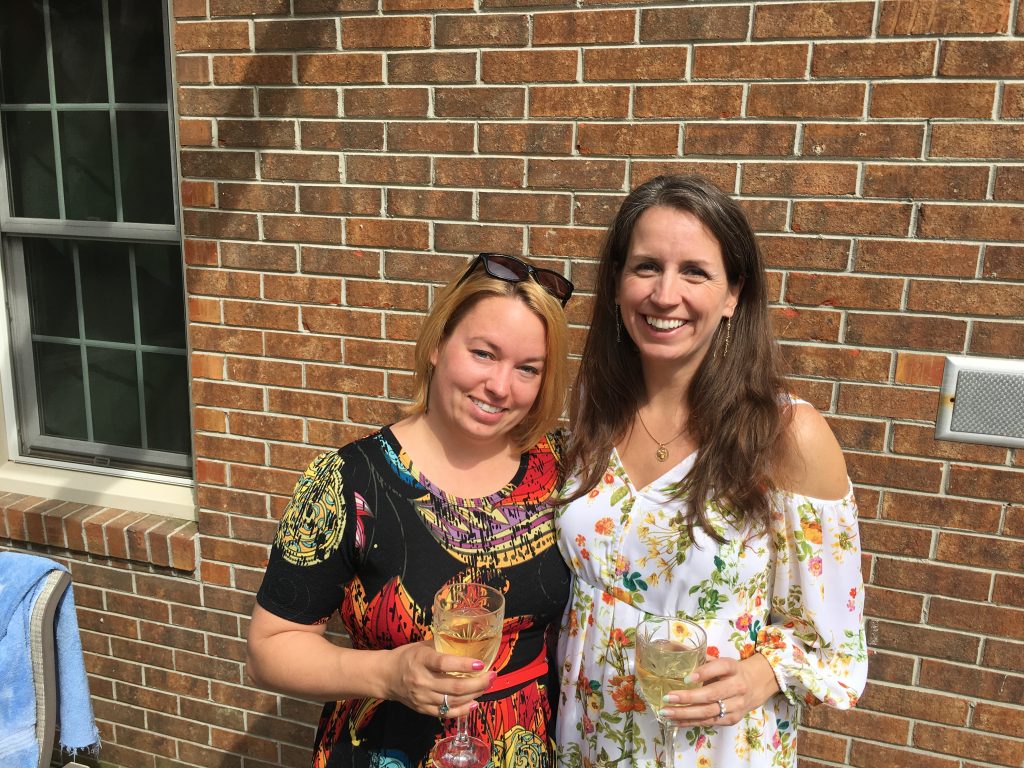 How did you spend your Easter this year? 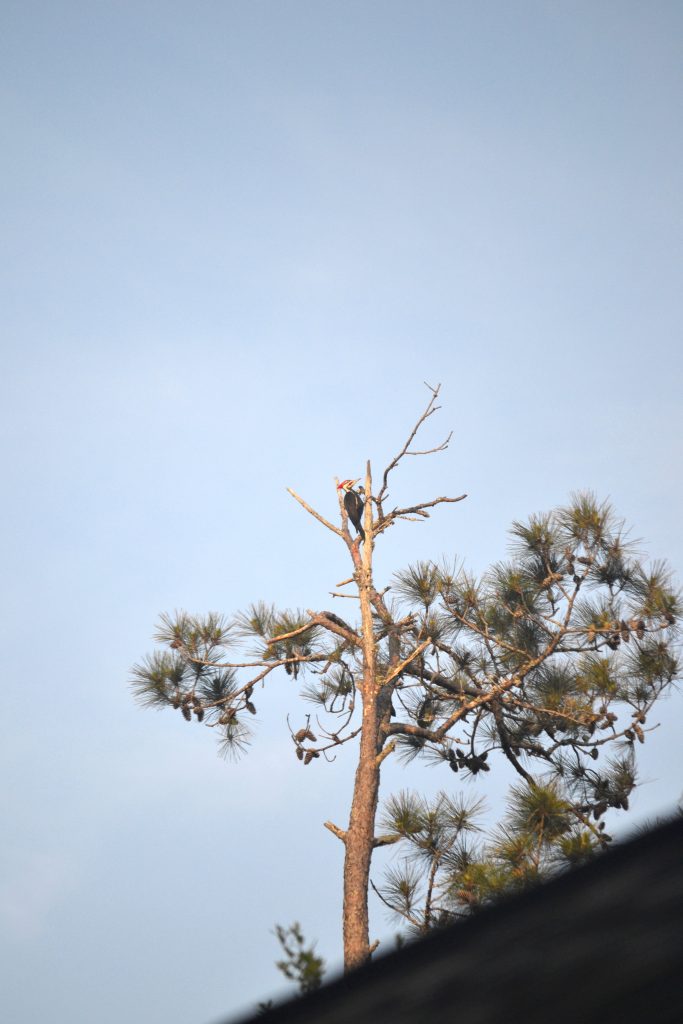 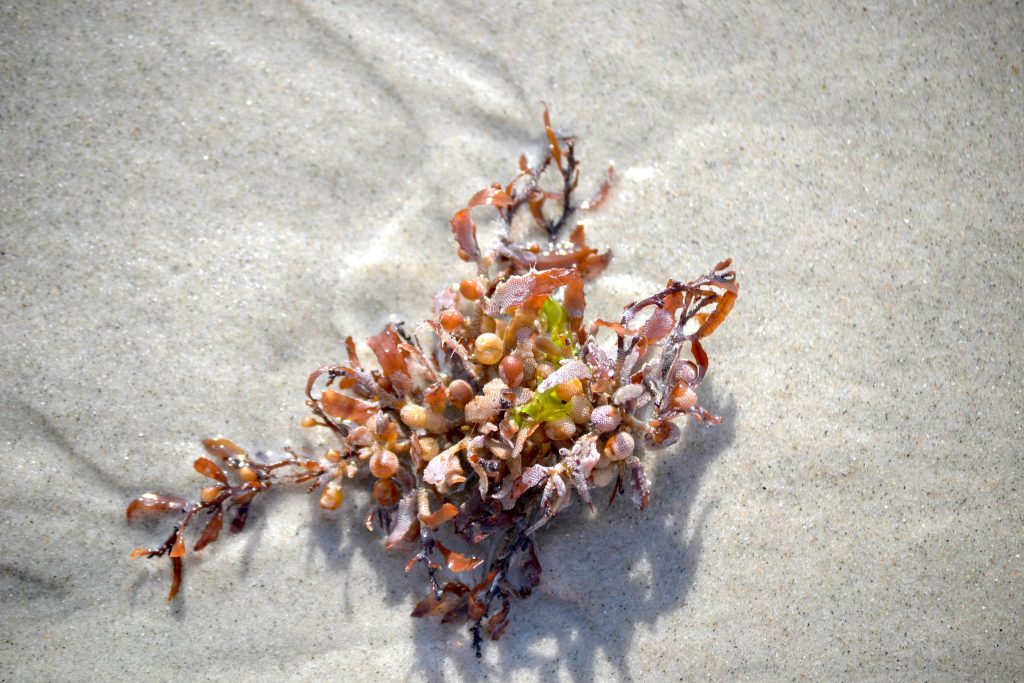 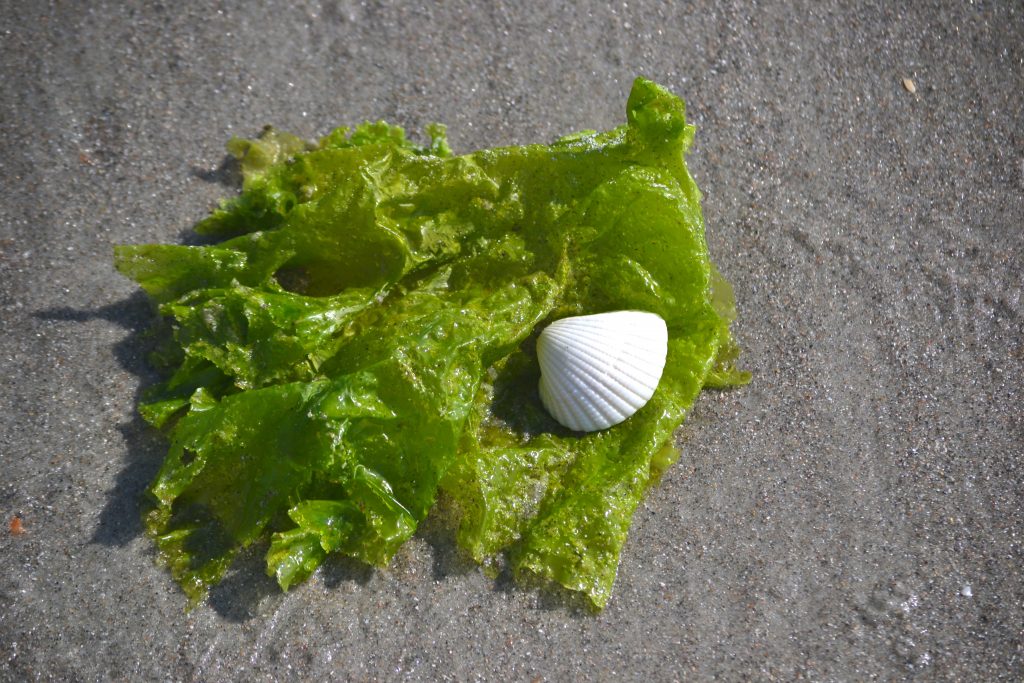 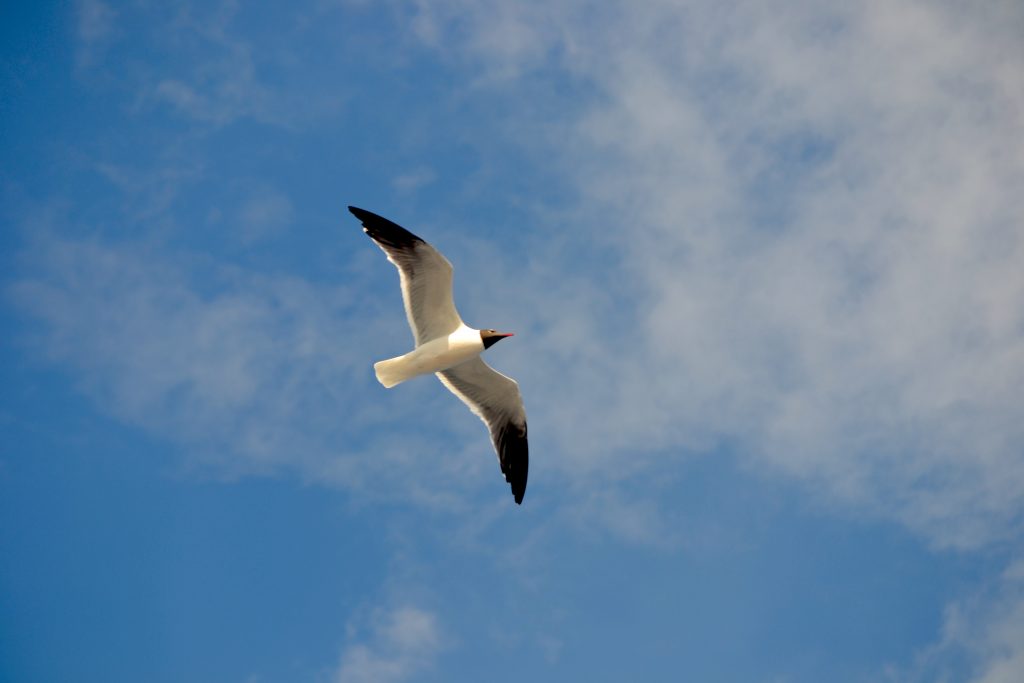 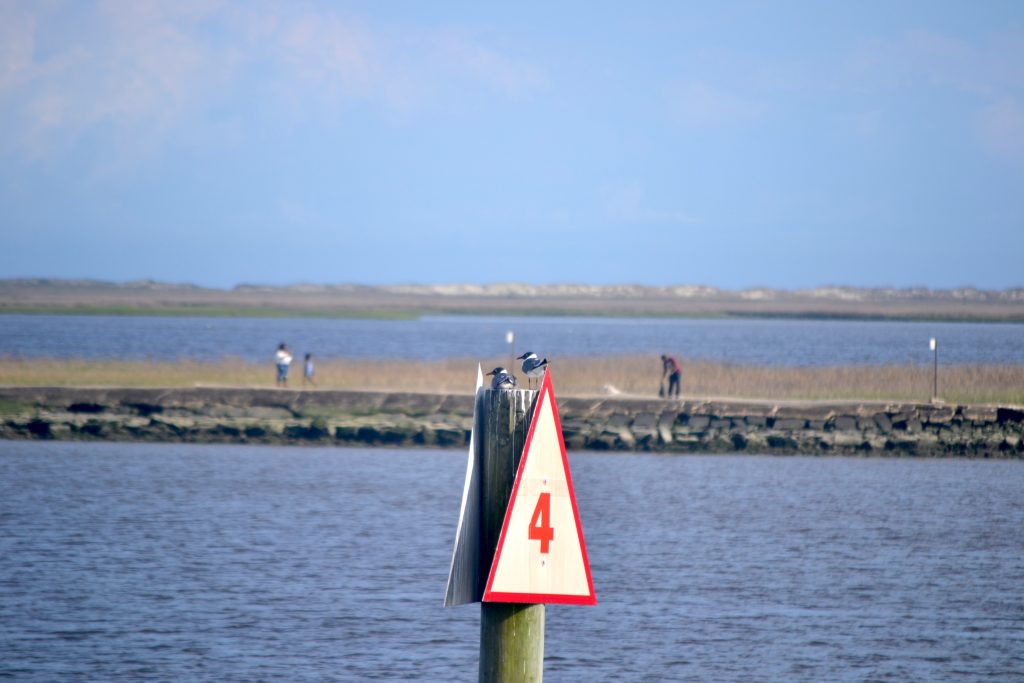 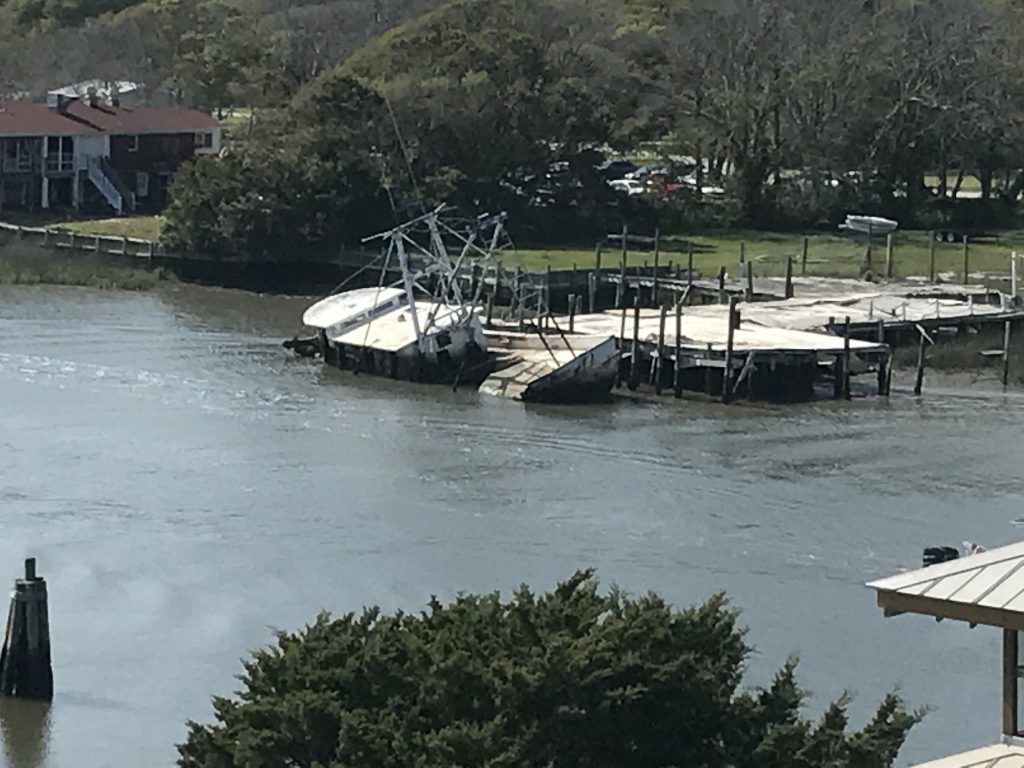 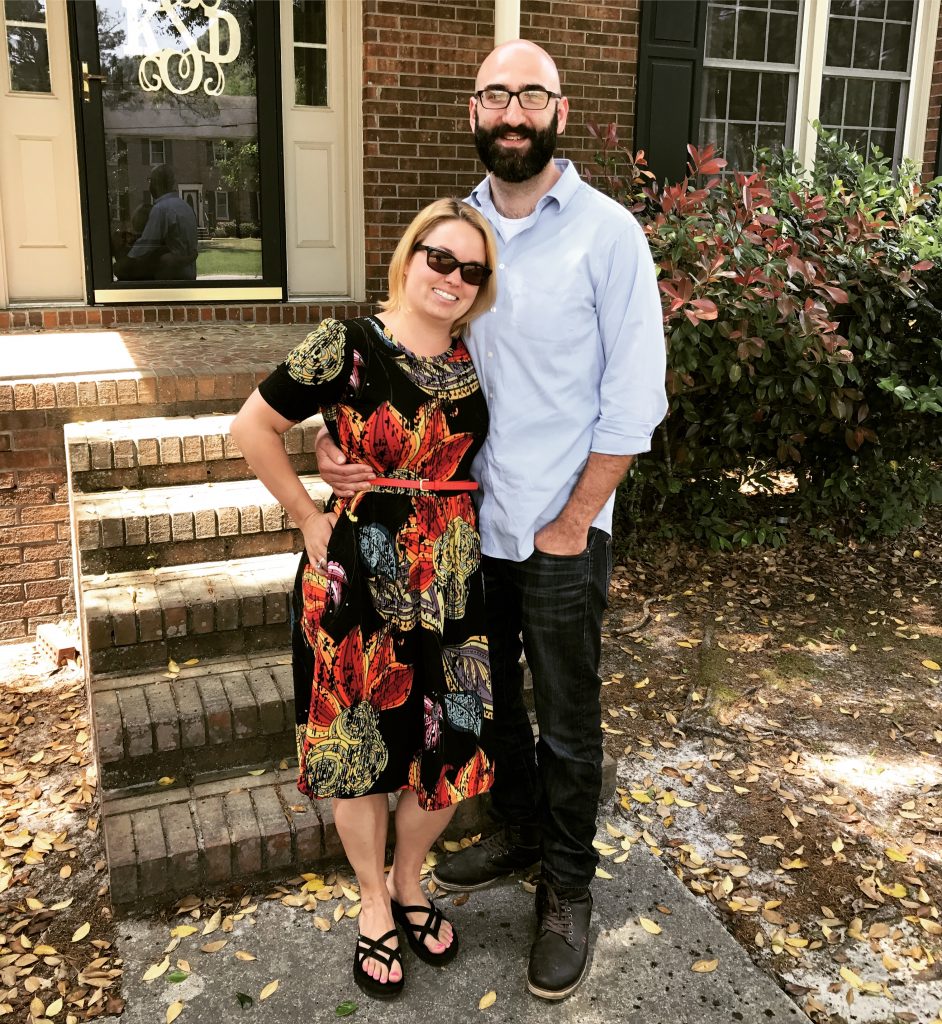 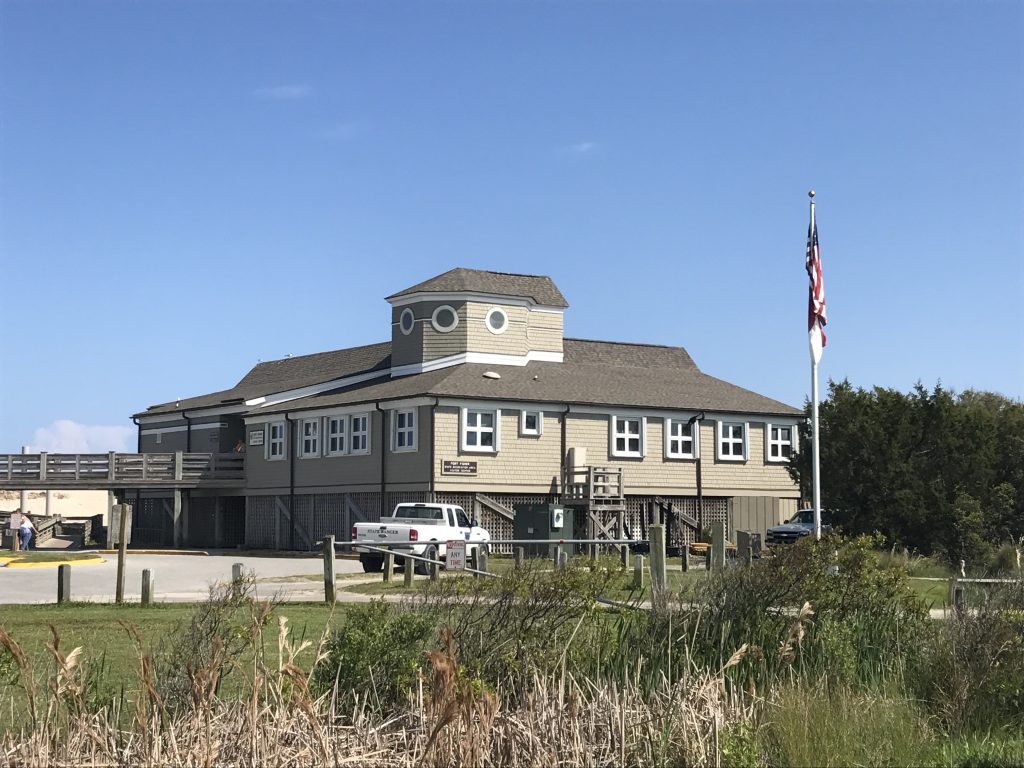