Last weekend I went to LA for the first time. To read part one of our trip, check out this post. To continue our adventure on Sunday, we headed out to Santa Monica. Our Uber driver recommended breakfast at a place called Cora’s Coffee. I think Katherine ordered the best meal with a caprese omelet. The setting was beautiful with a little covered patio full of vines and flowers and birds. Our waiter photobombed our selfie of the restaurant. The staff was a lot of fun and it was a great way to start the day. 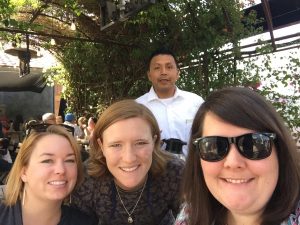 After breakfast we walked out to the beach. I was very disappointed to realize that my camera had turned on in my bag during breakfast and was now dead. I hadn’t thought to pack my charger or extra batteries, which is silly. So I pulled out my other camera and my phone. We got some nice photos of the pier and walked along the shore watching people workout and sell fruit on a stick. I put my feet in the water and added Santa Monica sand to my collection. I also collected a couple rocks that washed up along with a penny the ocean brought me. That makes it super lucky right?

We left the beach to check out the Third Street Promenade. There were a lot of shops and fountains shaped like dinosaurs. It was lovely but as no one really needed to buy anything we called another Uber and headed off to Hollywood. He dropped us off at the Chinese Theater to see the hand prints. It was amazing how dirty the hand prints were, you can really tell who the popular actors are. After finding our favorite actors, we headed up to the Dolby Theater. From there you can access a walkway to take pictures of the Hollywood sign. As my camera was dead, I used a work around: I put a quarter in the viewer and used my phone to take a couple photos. They turned out pretty well: 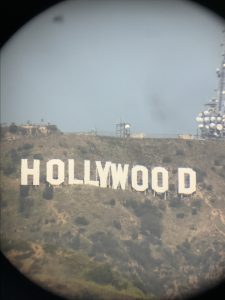 By then we had had enough of the crowds so we set off for In-and-Out Burger which we had yet to find but was highly recommended. On our way Dr. Frankenfurter stopped me to tell me he liked me. I said thanks and we continued on, weaving in and out between the costumed characters lining the sidewalk. The line at In-and-Out Burger was around the entire store. It was pretty crazy. We got cheese burgers “animal style”. Katherine also got her fries animal style which were much better than my cheese fries. Over all, though, I was underwhelmed after all the build up about how great In-and-Out is. I’d rather eat at Culver’s or Steak’n’Shake. (Ryan told me he’s not a big fan either and he lived in LA). 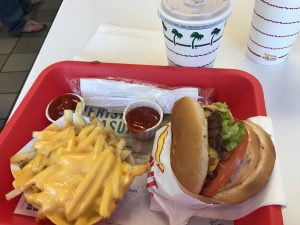 After downing our animal style food we went for a walk down Sunset Blvd. There wasn’t much interesting going on down there compared to Hollywood Blvd but we definitely needed to walk off some calories. After several blocks we decided we would call an Uber and head up to the Griffith Observatory. We had all watched La La Land on the way to LA so it was fresh in our mind. It was a lovely drive past some beautiful homes (lots of tiny castles). We popped into the observatory to check out some of the exhibits but it was super crowded. It was neat to see the exhibits featured in the movie. I was excited to see a Tesla coil but it wasn’t on. So I poked around until I found the on button. I pushed it but you needed a key. I have wanted to see a Tesla coil in action since I saw this youtube video:

Since it was so busy we decided to go up to the roof and check out the telescope and the views of the Hollywood sign. Katherine noticed that there were a bunch of trails heading down from the Observatory. So we stopped by the gift shop and topped off our water bottles in the café before setting off. We headed down the trail. I was really fascinated with the trees that were growing on either side of the trail. At one point I crossed over the trail to touch the leaves on a tree to see if they were soft. They weren’t. As I crossed back to the other side I passed in front of a couple walking up the trail with their dog. As they went past, Emily looked at me with big eyes and mouthed “That was Kevin Bacon!” Apparently I almost ran into Kevin Bacon and Kiera Sedgwick. I turned around and snapped a creep photo of the back of them. 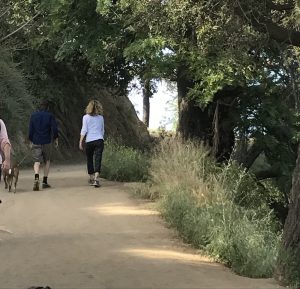 I had to laugh, though. I have a long history of mucking up my interactions with famous people. So it’s probably a good thing that I missed them otherwise I probably would have twisted my ankle and fallen down and taken them out. But we are now “One degree from Kevin Bacon” although my roommate says it doesn’t count because we didn’t talk to them. 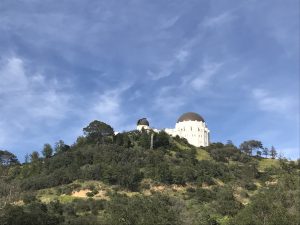 The trail was lovely and it was a nice way to end our sight seeing in LA. Katherine and I took the time to climb a tree on the way down. When we hit the bottom of the trail, we waited for another Uber to take us back to the hotel. We were so tired we couldn’t muster up the energy to do any more sight seeing in LA. So we finished up our trip with a movie. There was a Regal Movie Theater next door to our hotel so we decided to see Beauty and the Beast. It was the best movie I watched all weekend. I didn’t really enjoy La La Land on the way there and I watched Assassin’s Creed on the way home. Neither were good plane movies although they allowed me to do some work at the same time. 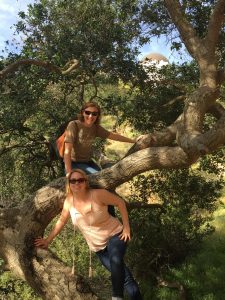 So it was a whirl wind trip to LA. Did we hit all your favorite spots or did we miss something amazing?

5 thoughts on “Hooray For Hollywood”