If you’ve spoken to me at all in the past 2 years, you probably know that it’s been a major initiative in my life to spend more time outdoors and traveling. A couple of decades spent predominantly inside, on my butt and in front of a computer had began to take their toll as I entered my 30s. Due to severe foot and ankle issues, even my exercise time was typically done indoors at a gym, on an elliptical or stairclimber to absorb some of the strain on my joints. With no significant reason other than sheer boredom with the way I had lived my life previously, I made a fairly broad New Years Resolution to spend “more time outside” in 2016.

Mostly, this was a success. Meeting Megan mid-year was particularly beneficial, considering she’s the perfect partner in crime for travel adventures. I also purchased and taught myself how to ride a bike, and began commuting to work via Raleigh’s excellent Greenway when weather permitted. Yet despite fulfilling my goal to spend more time outside and seeing most of the country on our amazing December road trip, I was missing one activity that I felt would truly connect me to nature: the age old tradition of camping.

With countless beautiful camp site options ranging from the mountains to the ocean, NC is a nature lover’s dream. Being centrally located in Raleigh means we can get to the ocean in a few hours, and the mountains in only a few hours more. So coming into 2017, Megan and I decided that if the weather was decent, and we had nothing else planned in town, we would spend our weekends checking out a new camping spot somewhere in NC. That’s a taller order than you might suspect, as both of our careers keep us quite busy.

Fast-forward to March, where we have yet to take our first camping trip. I’d been slowly compiling all the equipment we would need since late 2016, and it was time to take the big plunge and make the major purchase: the tent. We ended up going with the well-received Kingdom 6 tent from REI, as I was hoping a more substantial purchase would reward with a tent to last decades, not merely years. With the equipment assembled and only one Friday night free, we decided to do a trial run at nearby Jordan Lake. 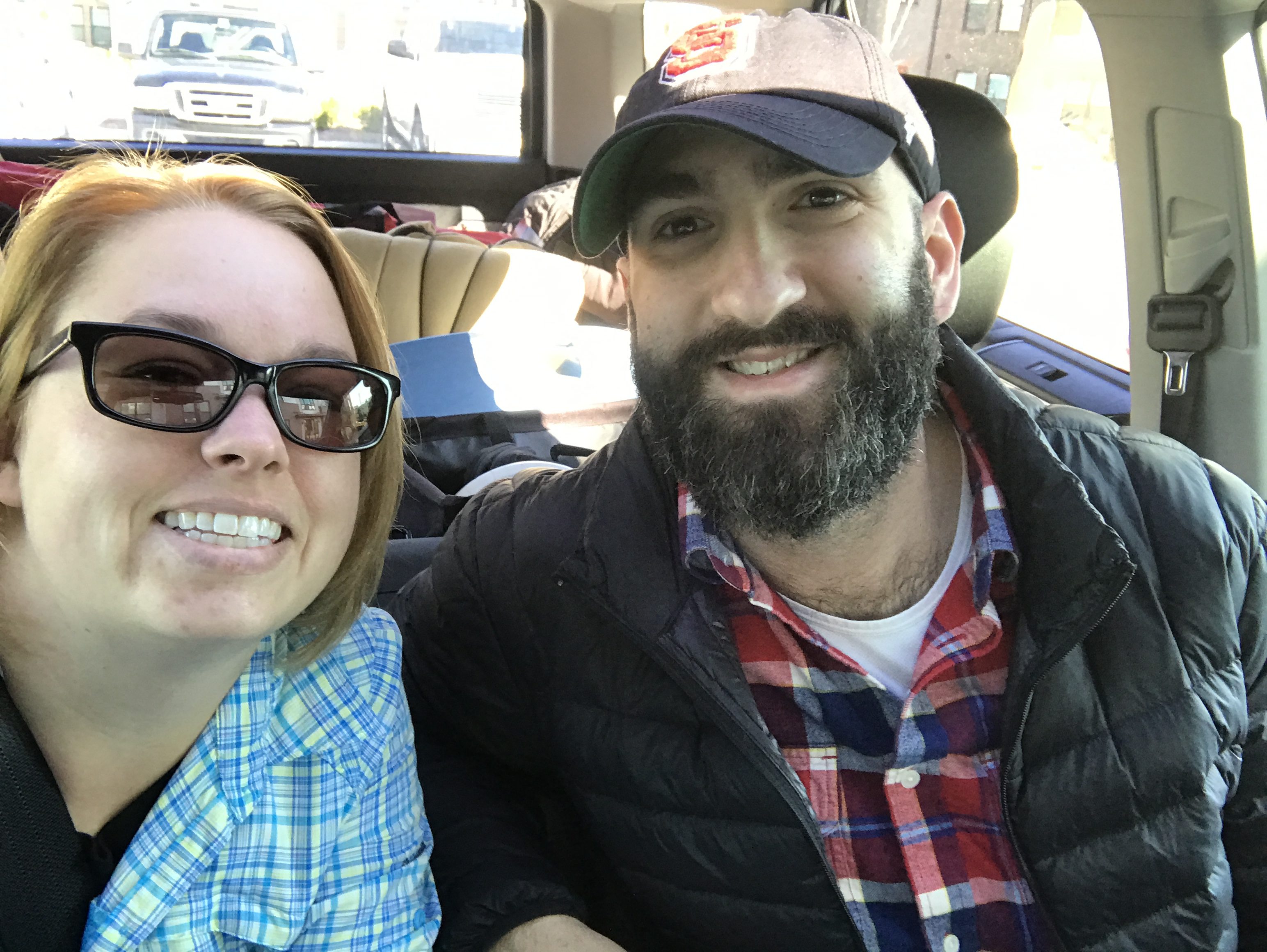 After getting out of work a bit early and packing the up the truck, we managed to make it to our camp site while the sun was still shining. The Kingdom 6 was relatively simple to setup – a quick viewing of a instructional YouTube video the night before was all we needed to prepare. After securing the rainfly (there was no call for rain, but Megan suggested it would potentially help keep us warmer), we got to work on preparing our fire. 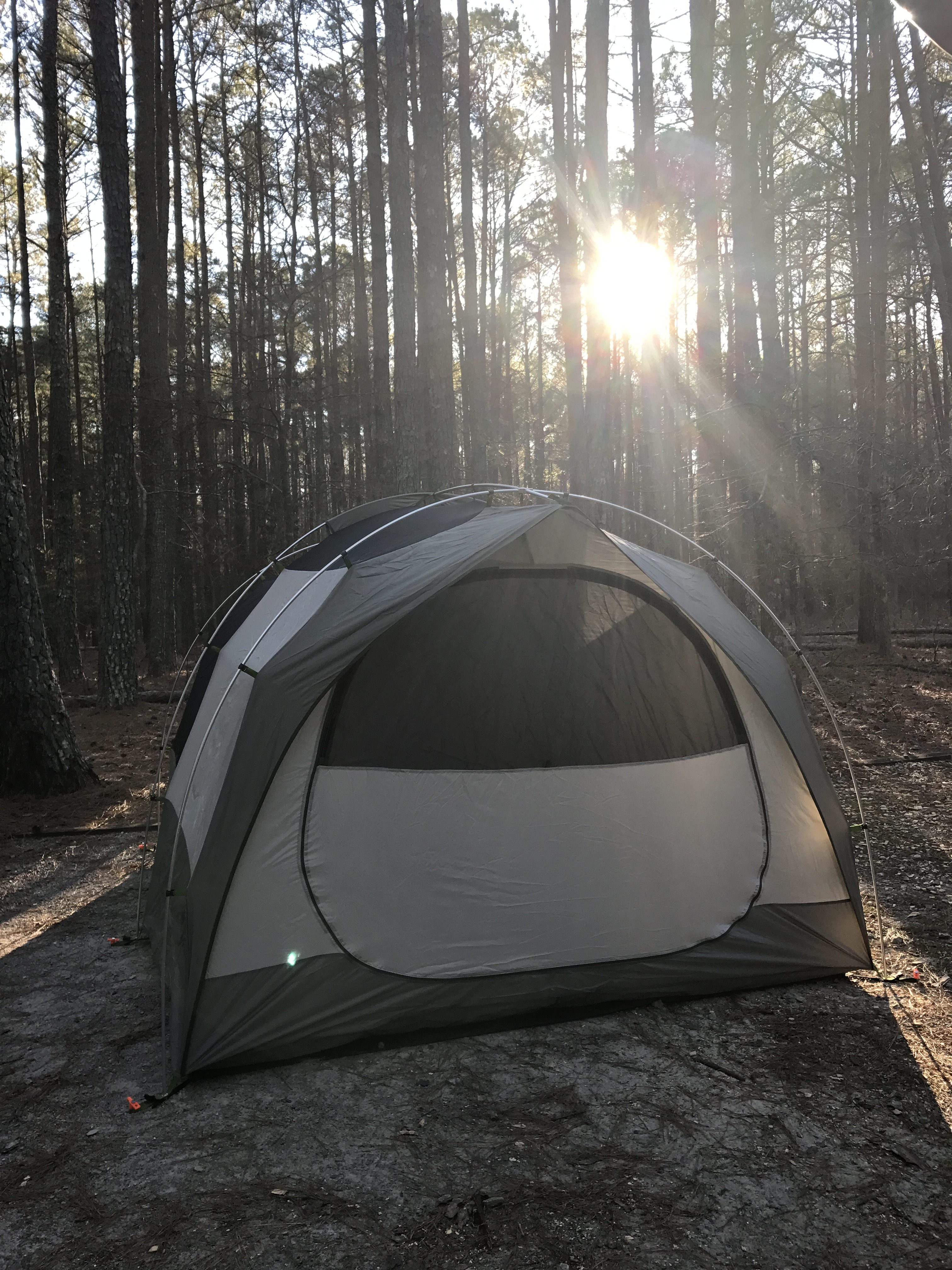 Megan is obviously the more experienced camping expert, so I followed her lead in setting up our magnificent fire wood “teepee”. The wood we had bought from the Park Ranger was exceptionally dry, and we had no trouble getting a roaring fire going. I hadn’t eaten much that day, so Megan suggested it was time for an early dinner! She had prepared a delicious foil packet dinner of Ranch Chicken and Sweet Potatoes. 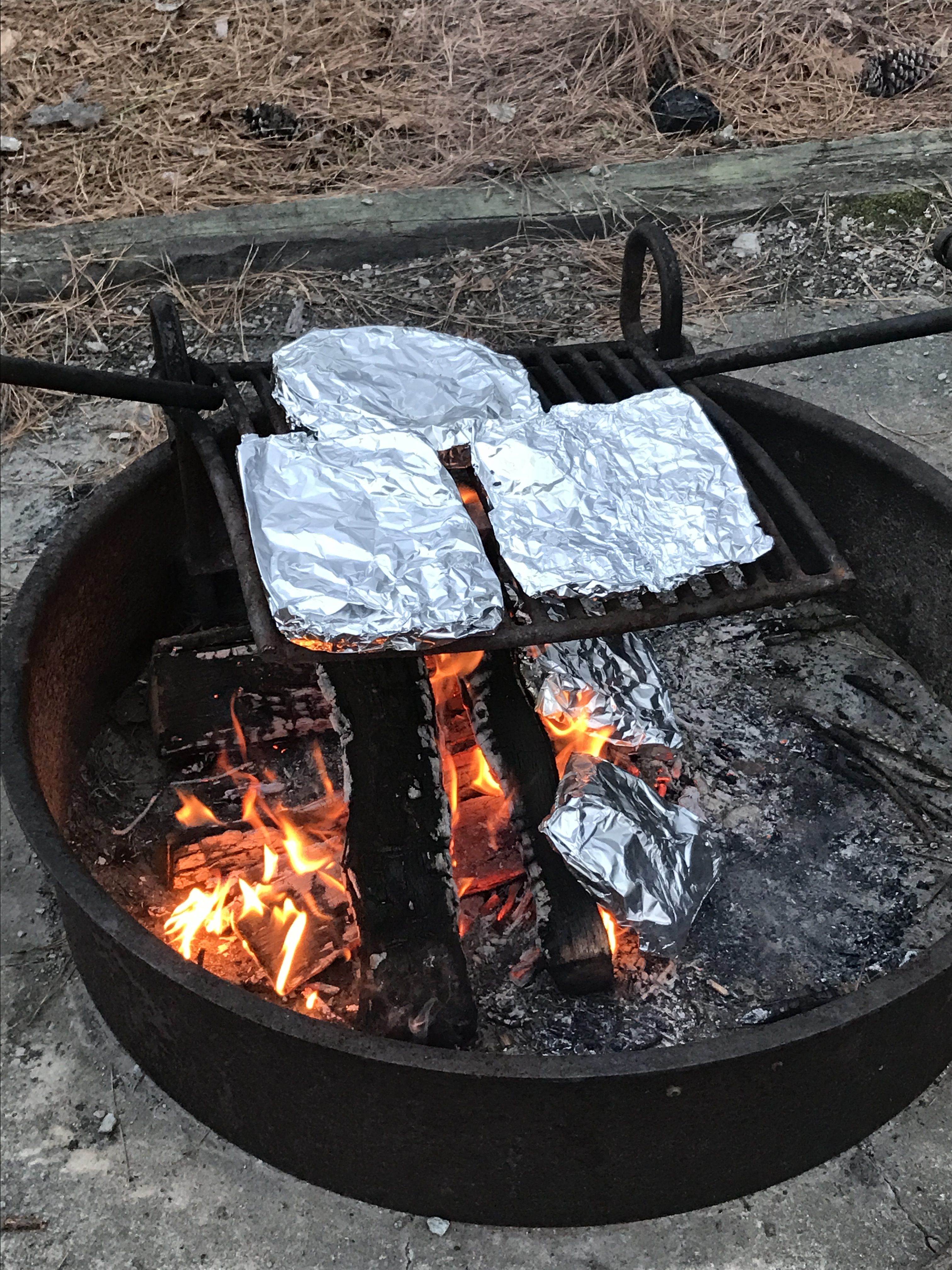 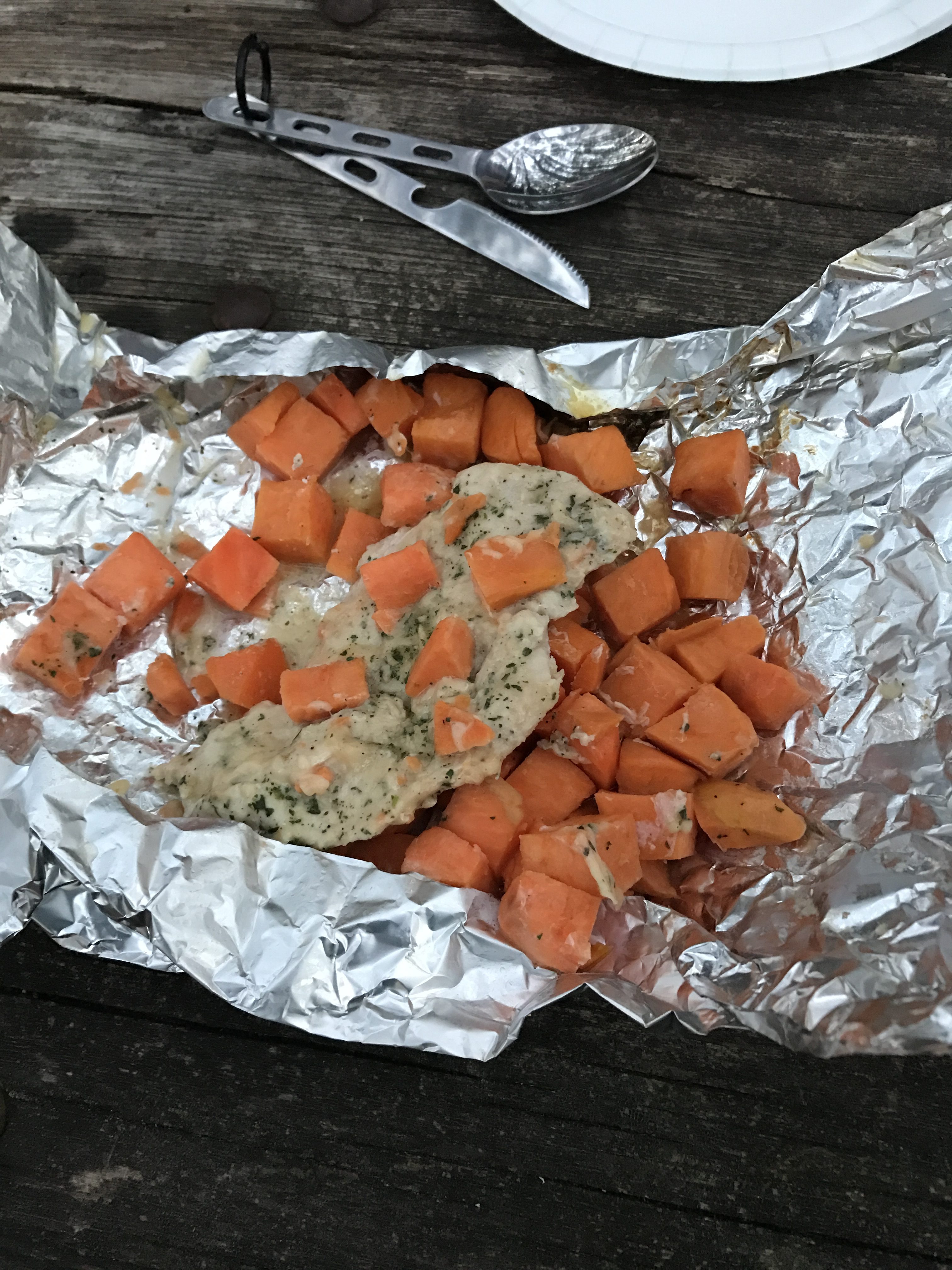 Within 20 minutes, we were feasting on more food than we could possibly finish. As we disposed of our trash, the sun was slowly setting and the temperature was dropping, so we threw a few more logs on the fire and settled in for the evening in our camping chairs. A few hours of relaxing and chatting, and then Megan did an amazing job preparing Jiffy Pop over the fire. 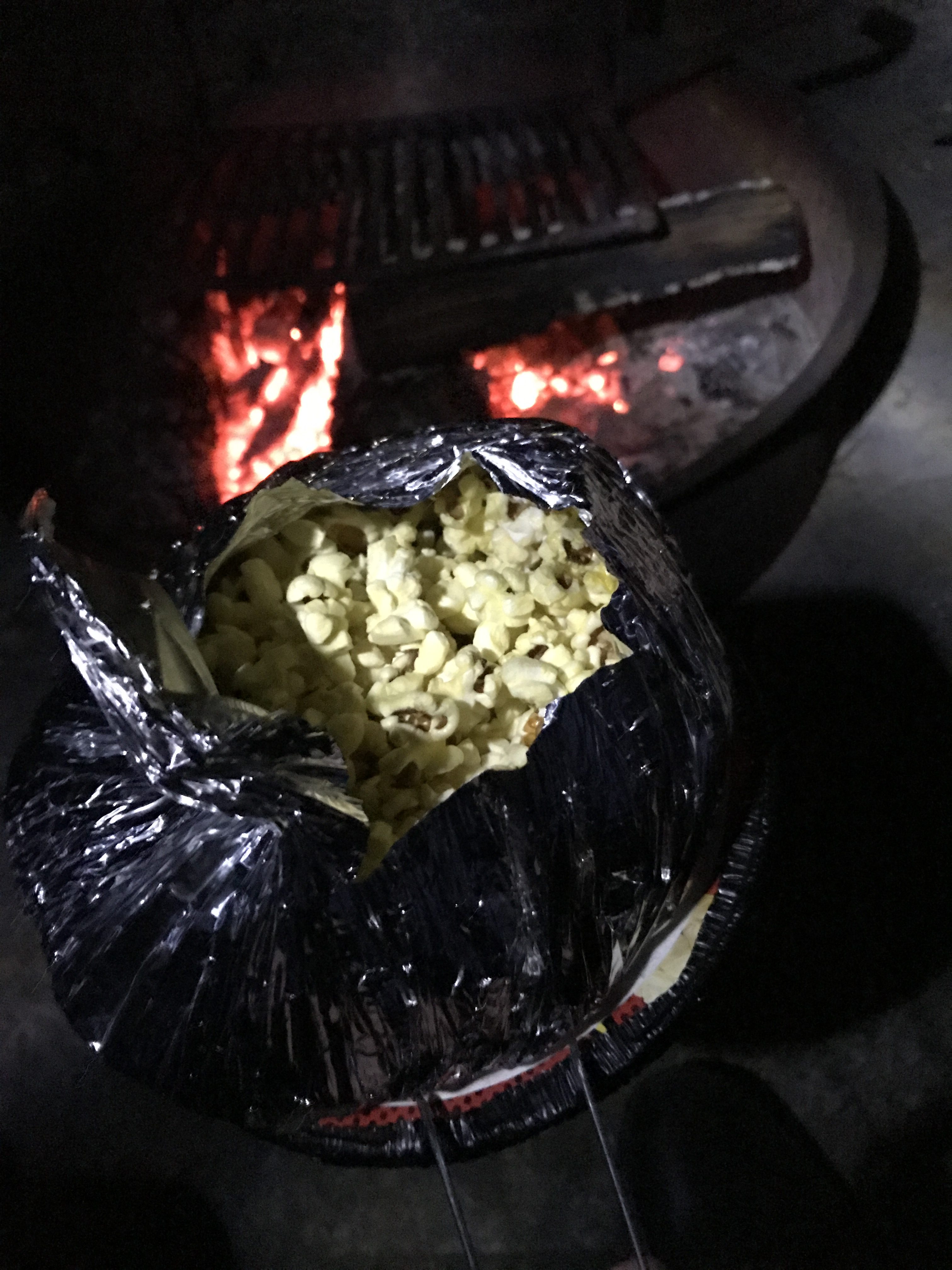 Before we knew it, we were even more full, exhausted and ready to retire to our tent. 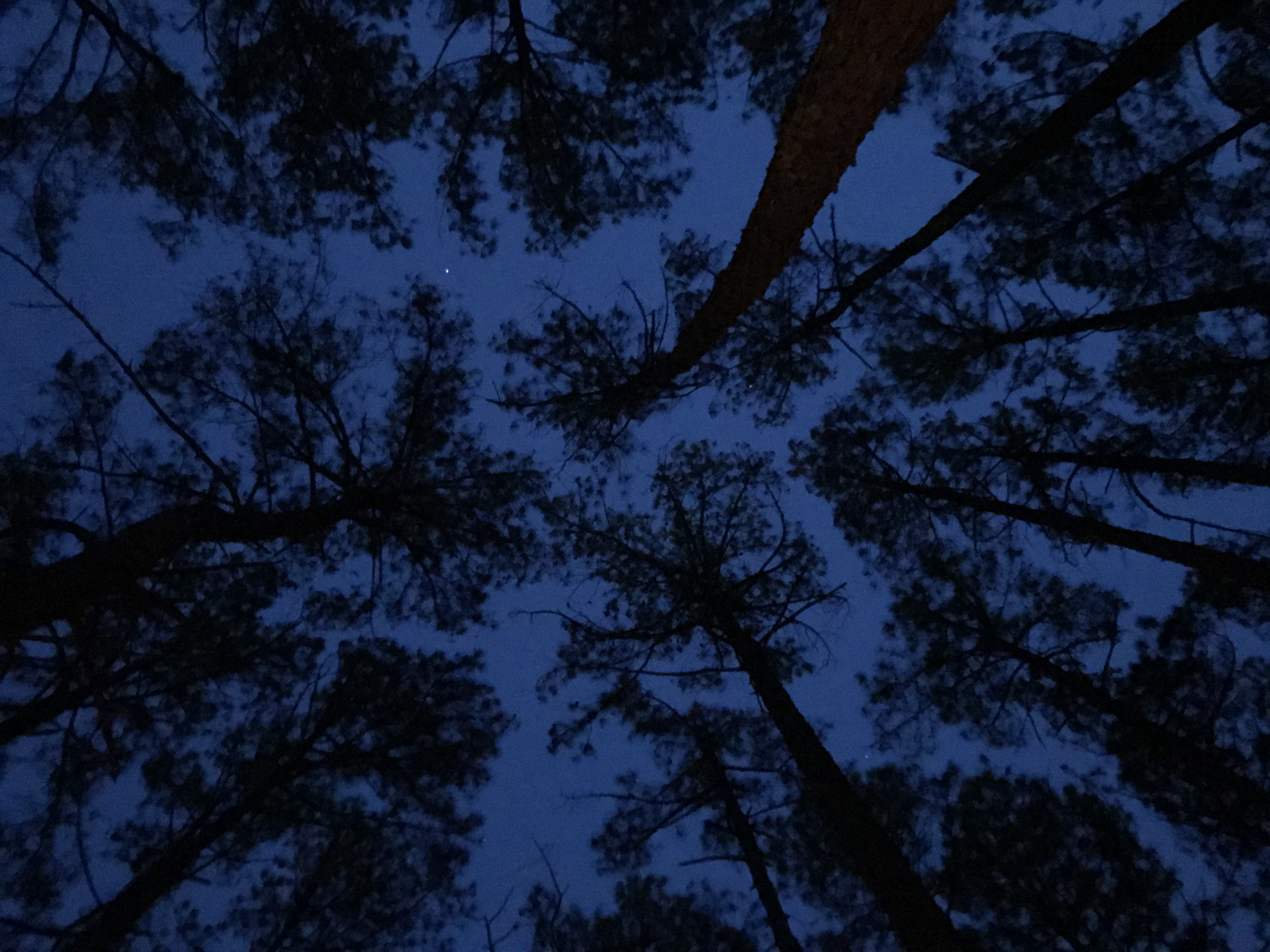 3 AM – a large crash and a deep, rumbly roar. “Is that a bear? It’s a bear,” Megan exclaimed as I shot straight up in bed. She jumped up and ran to the door of the tent, to peek outside. We quickly ascertained that an animal was indeed attempting to get into the trash can to acquire our disposed of left-overs, but it was considerably smaller and more rodent-like than a bear. That deep, rumbly roar? The loud snores of our camp neighbor, in deep slumber a few tents away.

One thing we had not foreseen was how low the temperature would drop that night. Without a dedicated sleeping bag (we were using an air mattress, an unzipped single person sleeping bag, and a load of blankets), we found ourselves painfully chilly in the morning as we awoke to near-freezing temperatures. 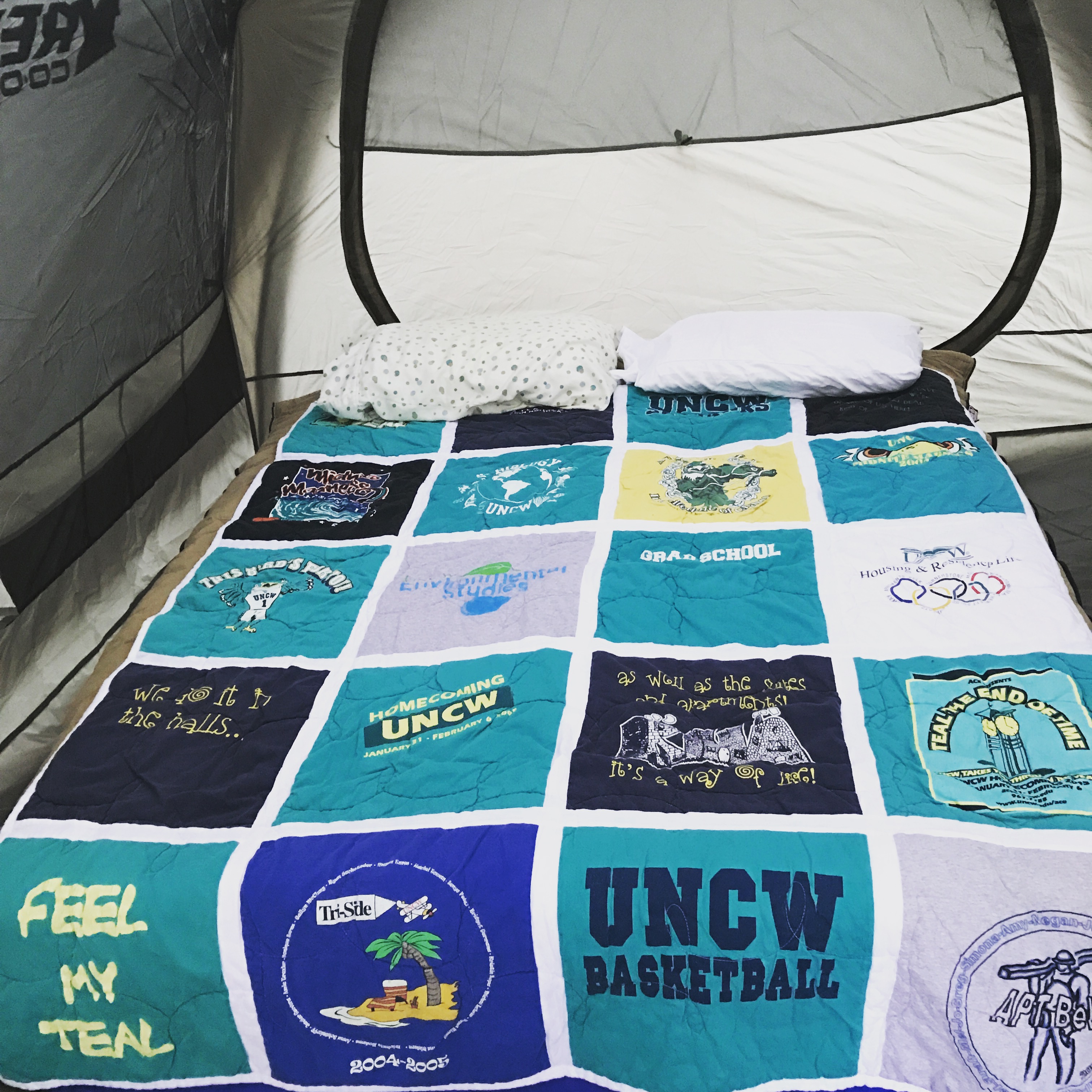 Megan was dressed much more suitably for the scenario, but still took pity on me. She graciously offered to take me out for coffee and a hot breakfast on our way back to town. Who would argue with that?

Though perhaps not our most action-packed adventure, our night at Jordan Lake was relaxing, fun – and most notably – a nice change from our typical weekend. We left armed with the knowledge of what we would need for subsequent trips (namely, warmer sleeping arrangements!) and some experience setting up and tearing down our primary camping gear. 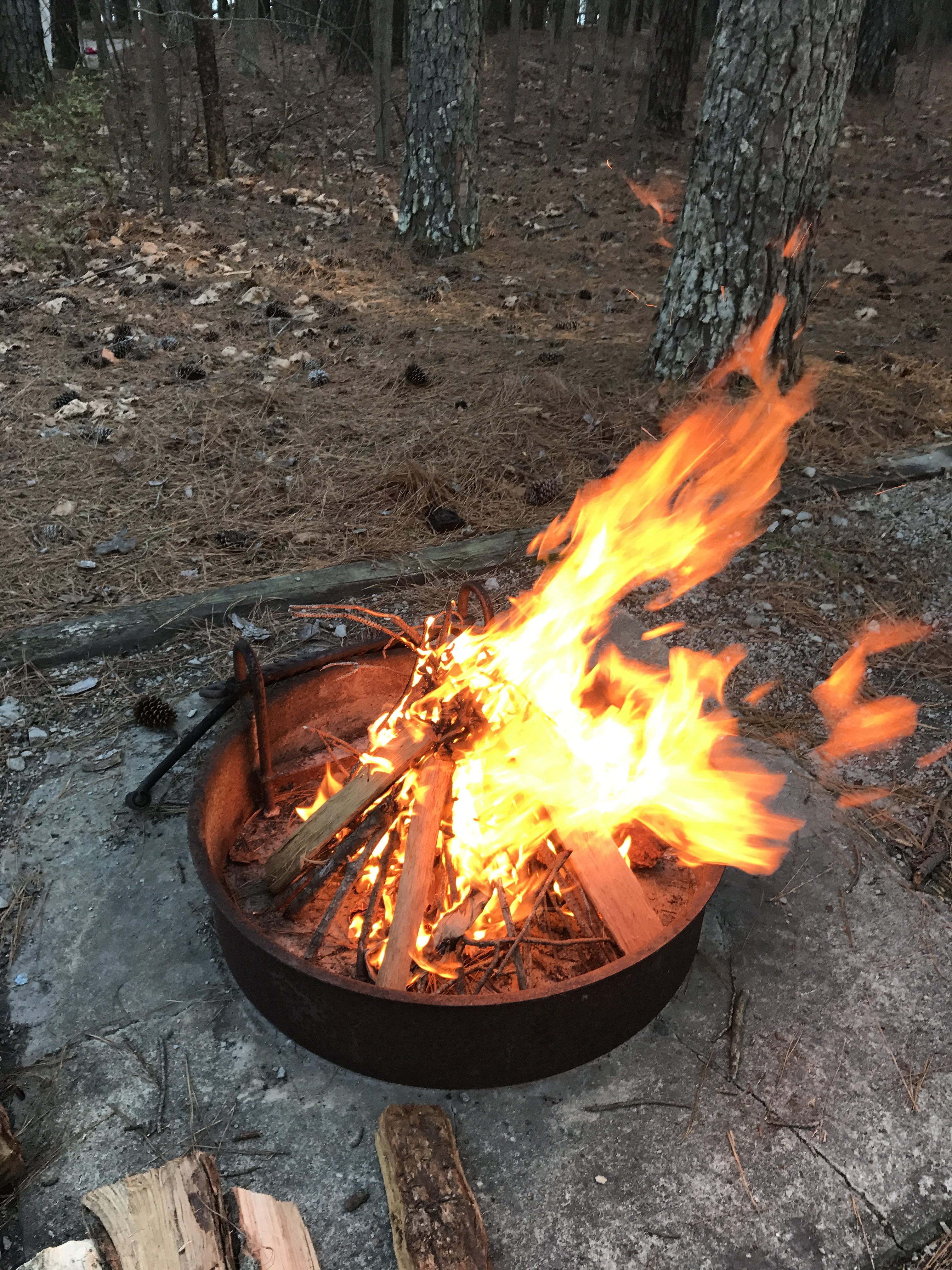 When was the last time you went camping?

1 thought on “My Kingdom for a Sleeping Bag!”